Vancouver Island Mountains: Now and Then

More info coming soon on Vancouver Island Mountains: Now and Then. Set up to honour the memory and legacy of Robie Macdonald (1947 - 2022), the goal of VIM-NaT is to get us out onto Island mountains to rephotograph old(er) mountain images.

The event will run from March 2022 - January 31, 2023 - look for more info here on how to participate in this fun and fascinating “peak” into the changing mountains of Vancouver Island.

Questions/comments/ideas? Feel free to get in touch with either Catrin Brown ( catrinbluesky@gmail.com) or me (msanseve@gmail.com ). We hope this is the start of an outstanding project that will honour the memory and legacy of Robie Macdonald – an outstanding mountaineer, friend, colleague, and person. Climb on!

Veitch Creek bridge then and now. First photo was taken 19 Nov 2012 during a rainy spell not long after the log bridge was put in. The second photo taken 13 March 2022 about a year after new bridge went in. 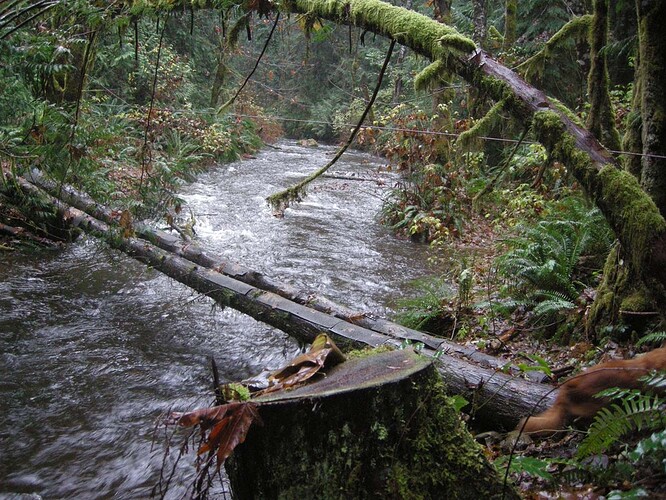 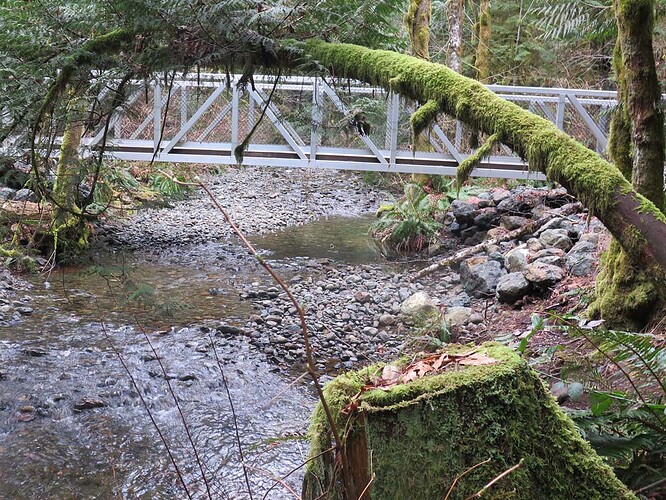 On 21 August 2012 Lindsay Elms led a group of 8 ACCVI members on a centenary expedition to the summit of Elkhorn Mountain, 100 years to the day after the original first ascent. We tried to duplicate the view in the original photo but were never quite sure if things still matched up. Not sure the proper credit for the original, Whyte Museum? 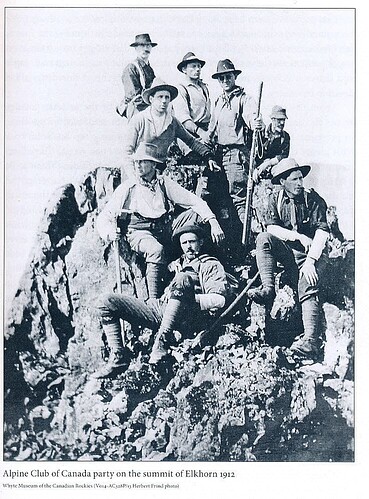 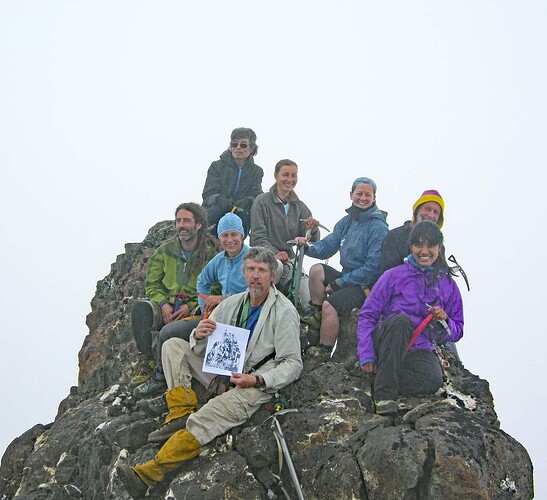 Rob and I had a back-and-forth email exchange in February 2021 regarding an article I submitted for the IBW that included an image from the Tom Taylor ridge en route to Mariner. He sent me a photo from 1985 of the same location (attached below). He sent a followup email, which I’ve copied below (I also attached the referenced photo he sent to me):

“Barry; It’s even better still. One of the benefits of being the editor of our ‘august’ historical record is that I get to read people’s tales of adventure first and see their pictures in full detail. The latter have immensely improved in the digital age. I frequently see trips where images are similar to ones I’ve taken on trips years ago. This is not merely a bin-there-done-that kind of thing. It is a rather pleasant combination of memories, nostalgia and continuity. As you get older it seems to become even more precious to preserve these places so that in each new decade a new cohort can wander out and enjoy these places just as if it was the first time they’ve been trod upon by a boot. I’m attaching a picture that you will easily recognize. It is Rick Eppler just about to complete his last IQ - Harmston. We went in close to the Fall equinox and in one long day out of Lone Tree Gap we traversed Argus, crossed the Cliffe Gl, trudged back over the Cliffe to climb the Red Pillar and then back across the summit of the Comox Gl. It was a glorious day on styrofoam snow meant for crampons. Now compare that to your image on page 38 of the 2018 Bushwhacker (wish it were printed in colour!) and page 74 in the 2019 Bushwhacker where the late Laurence Philippsen was completing his IQ. Perhaps my own history influenced the size I gave to these two images, but really they are both splendid and so typically Vancouver Island mountain that how could I not?”
Rob 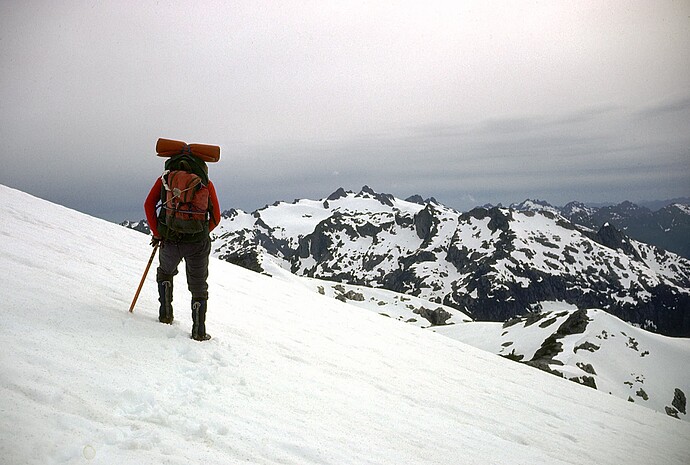 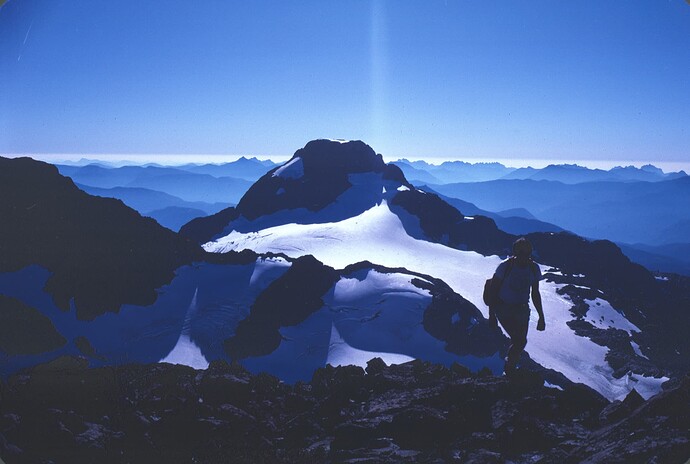 I have visited the south end of Flower Ridge at least a couple of times: In 1982 when Don Berryman and I climbed Mt Rosseau from the north, and in 1986 when Don, Wendy Richardson and I reached Flower Ridge as a finish to our mostly-clouded-in traverse from Paradise Meadows. From those trips I have photos of the north side of the Rosseau-Septimus massif, and both trips were early-mid July. Recently Catrin Brown, Mary Sanseverino and others visited Flower Ridge and took some photos of the same, though perhaps not from the very south end of Flower Ridge. Still, Catrin’s and my photos can usefully be compared. (Thanks Catrin for sending me your photos.) At location A in Catrin’s 2022 photo there is much less snow over the bluffs below the Misthorns. There’s a whole extra crevasse/moat at B. Location C has less ice/snow. And the snow cover above D looks like a snow finger in 2022 and a bit more like a bit of glacier in 1986. Also the D area looks like a crevassed glacier in 1986 and seems smooth this summer. Unfortunately the glacier face E isn’t visible from Catrin’s viewpoint, so if you have a recent photo that includes that, it would be interesting to see. 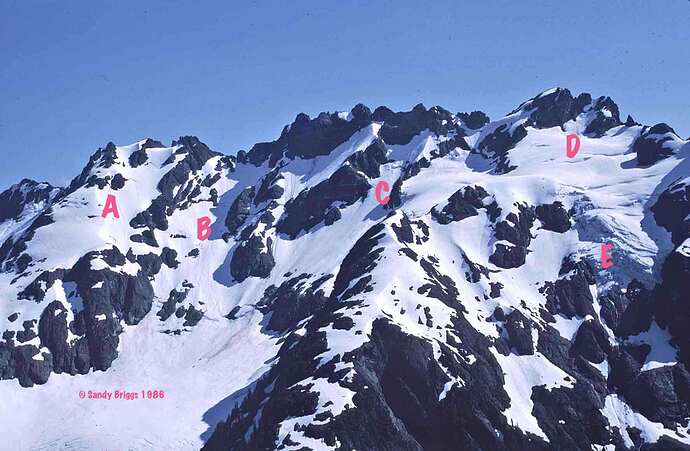 Thanks for this analysis Sandy. The date of our 2 trips is similar - both July. This was a late snow year so the contrast would have been even greater, say last year. But the overall pattern of declining snow pack is pretty clear.
Anyone got a picture of the glacier face, E in Sandy’s pic? 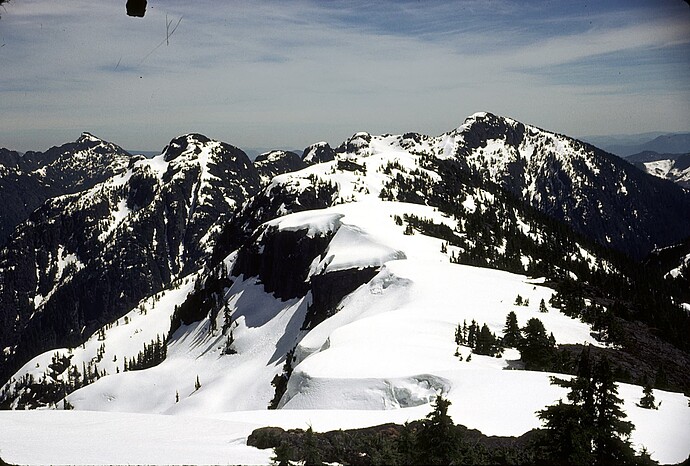 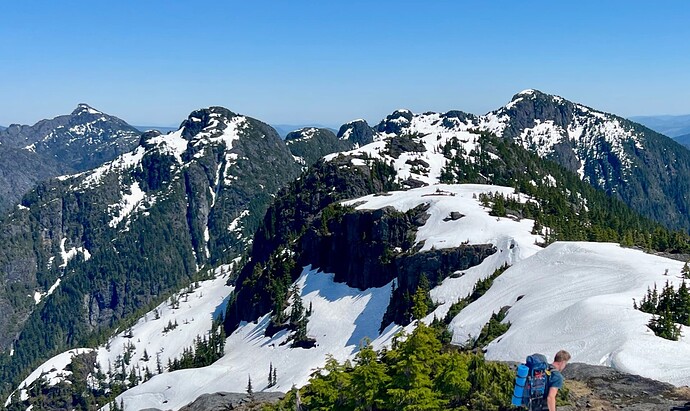 Fun fact: I hadn’t seen Rob’s picture when I took mine - but by chance realized we’d been standing in almost the same spot looking down the SE ridge to El Capitan and Landale.

A difference not obvious in the photos is difference in access. ‘Back then’ you could drive up Cottonwood and even East Cottonwood to get close to the mountain. Now with locked gates the trip starts from Cowichan Lake, approx 8 km hike/ride to the start of the climb. 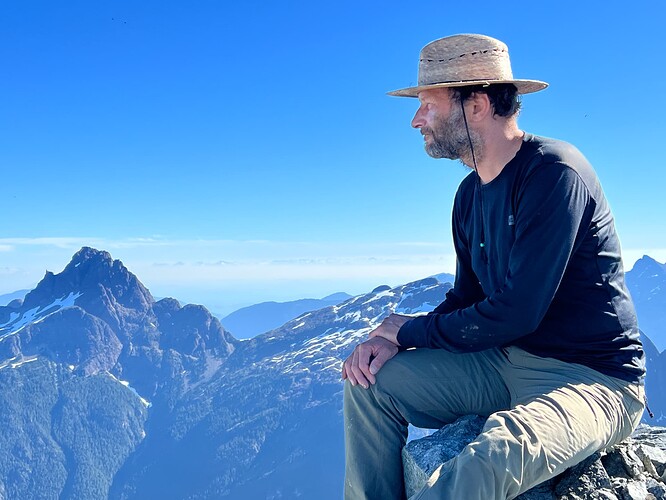 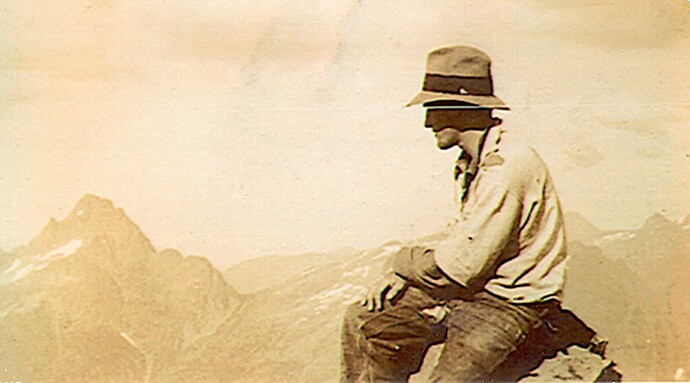 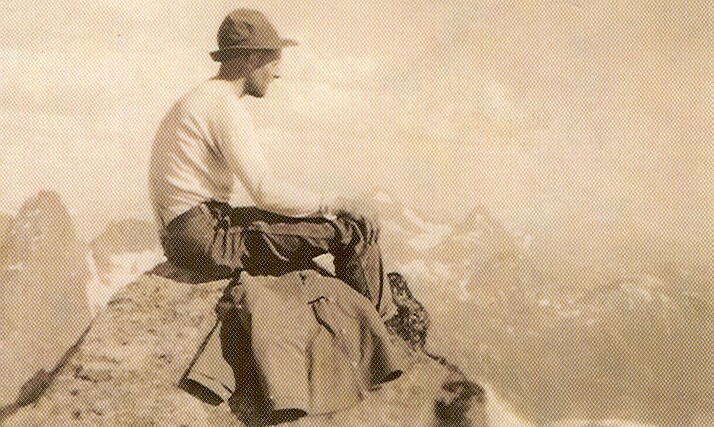 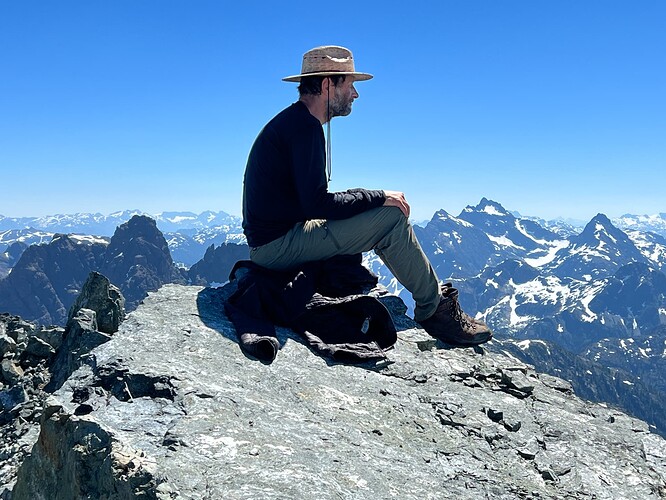 View from the summit of The Golden Hinde looking towards Mt. Colonel Foster, Rambler Peak and Elkhorn Mtn. 1937 and 2006. 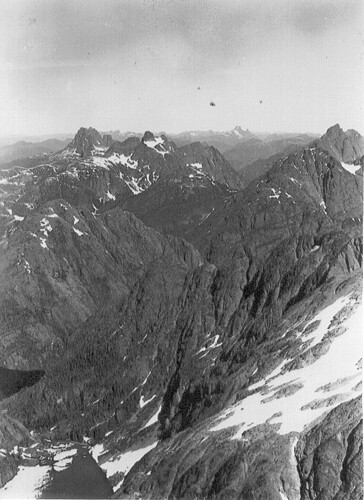 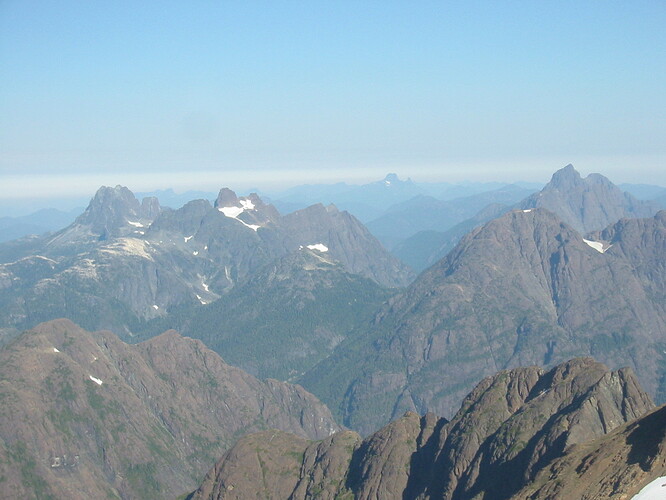 From the summit of Mt. Filberg looking across to Mt. Cobb 1936 and Barry Hansen’s photo taken in 2021. 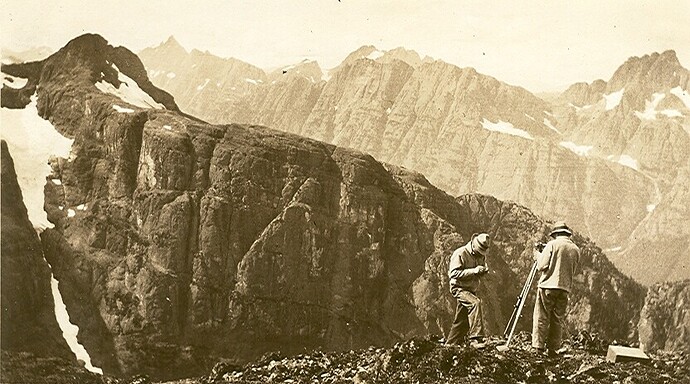 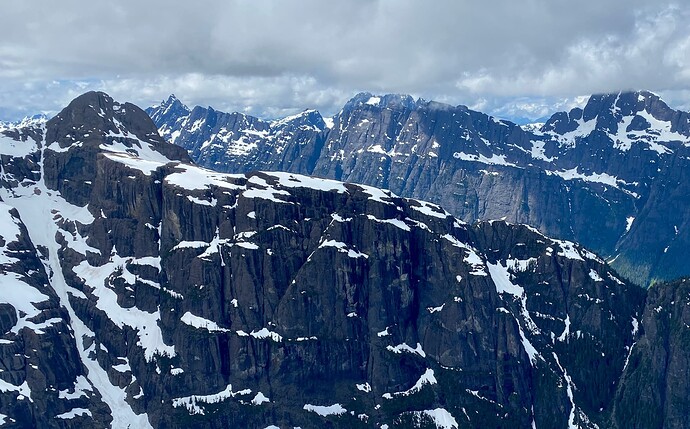 From the summit of Mt. Filberg looking down onto a small lake to the northwest 1937 and Rich Priebe’s photo taken in 2021. 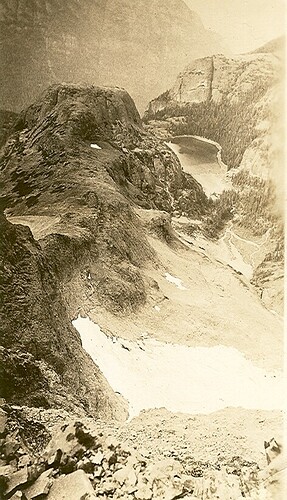 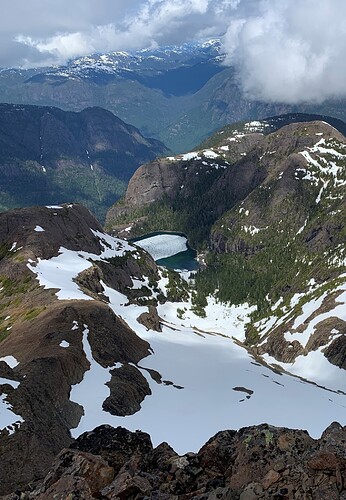 Another 1936 photo looking across towards Mt Cobb from Mt. Filberg 1936 and Rich Priebe’s photo taken in 2021. 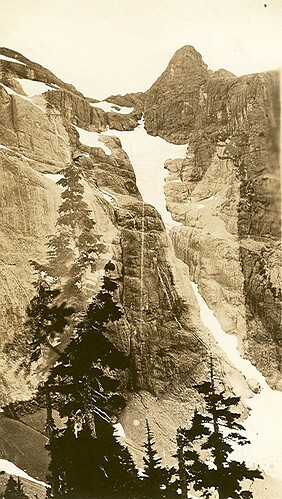 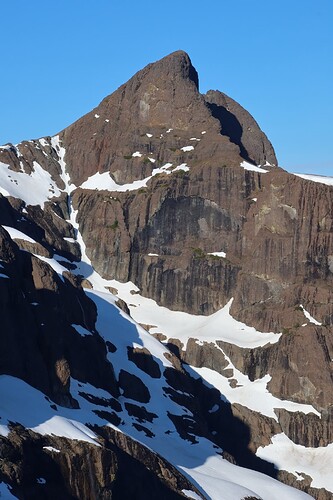 Surveyors were on the north side of The Golden Hinde in 1937 and my photo from a trip up the Wolf River to the same area in 2014. 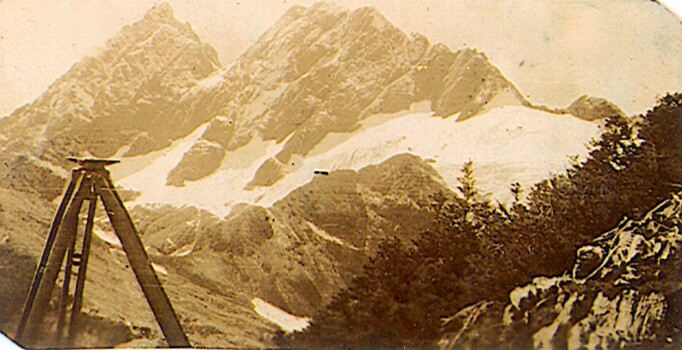 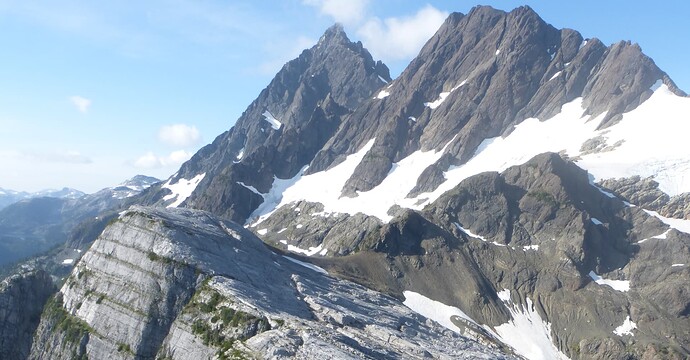 From the summit of The Golden Hinde 1937 looking down onto The Comb (also known as The Pimple when Syd Watts, John and Doreen Cowlin, Joyce Clearihue, Jane Waddell and John Richardson climbed it in 1963) and my photo from 2006. 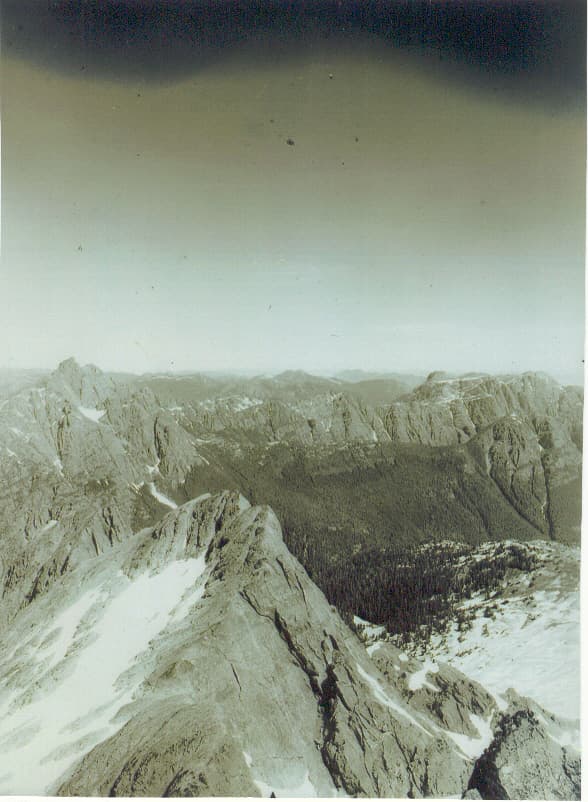 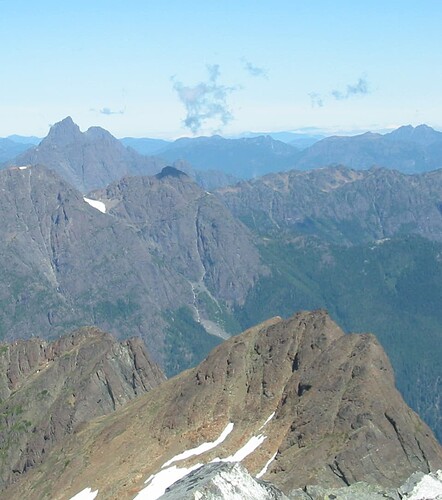 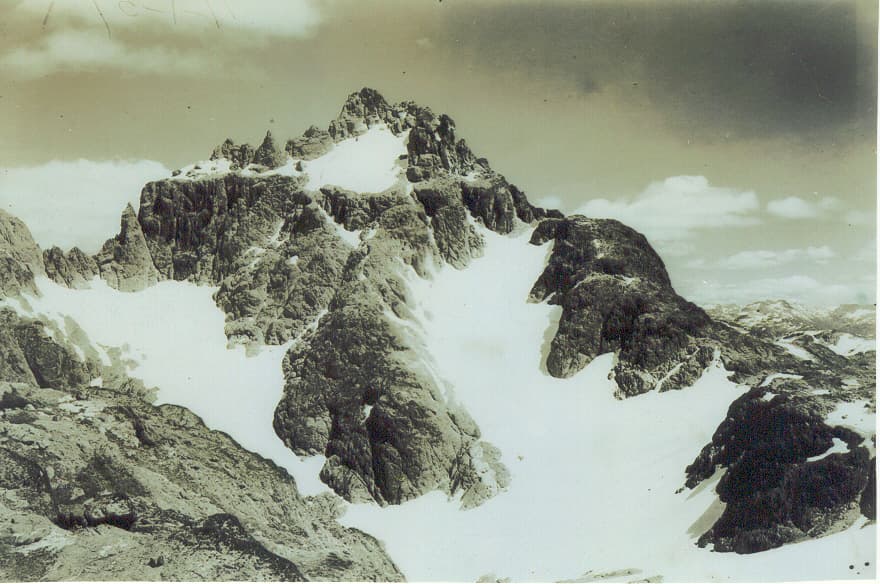 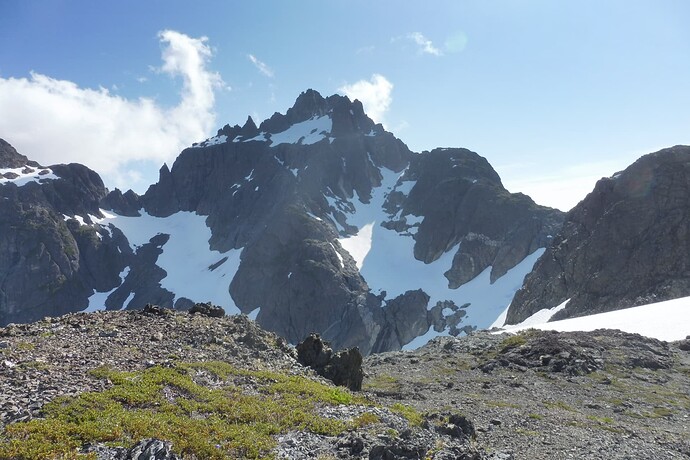 These are wonderful Lindsay! Can you give us the back-story of the models now and then please?