Carey Lakes area is so distinctive and beautiful that Strathcona Park boundaries were extended to include it as I understand.

With the clear & complete ACC directions it was easy to arrange gate access to Comox Lake Main and then Cruikshank River Main. At [49.6290 -125.2730] we branched onto Crk 8000 which climbs steeply to a small spur at [49.6263 -125.2999]. Cross ditching then stopped our vehicles at 990m elevation so we walked a couple more kms to our start southeast of the lowest Carey Lake. Having driven up from Victoria this worked well for the first night’s stop.

Aside from some miserable blowdown at the edge of the clearcut this leg to the first lake was pleasant, following remnants of a trail along a small stream. In contrast to the upper lakes, this lower area is marshland and forest. The route from here is bushwacking west up the broad forested ridge on the south side of the upper Carey Lakes. We found occasional tapes but not enough to avoid some vegetable belay sections on the way up. Conversely on the way down we found a well flagged section that conveniently avoided some of these spots.

This next night we couldn’t resist camping on a rocky hilltop just above treeline with tarns and 360 degree views from the mainland to Comox Glacier. It also introduced us to something new: we all know tornado, firenado, even sharknado, but now we have tent-nado. Neil & Wei’s tent simply lifted off the ground and swirled around tantalyzingly (taunting us?) above our heads for a couple circles before Dave managed to grab it on a dip. There was generally no breeze and we weren’t in a contained area so we can only surmise it was Fate having amusement at our expense.

The next day dawned beautifully and we had the pleasure of walking open rolling hills and ridges the last 6 kms to our intended base camp area. Scenery through here is class 2 walking with idyllic ponds and dramatic cliffs to suit all scenery tastes. Beautiful even with heavy packs. That said it’s still intermediate level due to the route finding required and consequences of a slip in damp conditions.

This had been a deep snow year which was balanced with a couple summer heat waves to give mostly open ground with snow starting at 1600m. Even base camp at 1860m was mostly snow free with plenty of tarns. It looks like in future years there would be one or two persistent snow patches for water.

Although this entire area is shown as Karmutsen volcanic rock with Quatsino limestone, only certain areas had geode-like inclusions up to a metre wide. These were green perimeter with opaque white centers, but no clear crystals. Another unusual feature was patterns of black marks on the surface of the rocks. Obviously bring a geologist for maximum enjoyment of your next hike here.

The first of our three full days hiking out of base camp we used as a rest day with just an easy hike to the head of Ralph Ridge via Mt Siokum, stopping often for rock pictures and flower photos. In general the landscape here looks like the reddish surface of Mars. The second full day we tried a more strenuous trip to Mt George V but couldn’t see a safe way down from our side to the saddle at [49.6174 -125.4124], so we hiked a nearby ridge instead and dropped down closer to Delight Lake which lives up to its name.

For our last full day’s hike we went south to Mt Celeste which is really just the high point of the ridge. Note that this area has some class III gullies, and we benefitted from a few well placed cairns. There was good snow to boot up in the Aureole snowfield but at this point of summer there was already bare ice in the center, and a new seasonal lake was open at the toe of the snowfield. Weatherwise, the convective clouds over the mountains had been starting earlier each morning and growing larger during the days. Today we had good visibility until the summit, and if I hadn’t been so complacent about our starting time, we’d have had time to nip over to Iceberg Peak also. Next time.

We took two days to return to the vehicles via the same general route as our ascent. I know I thoroughly enjoyed the company of Neil, Wei, Rei, and Dave Suttill. With the rolling hiking terrain and interesting geology this is a must do for people who like hiking barren landscapes. -Gordon.

P.S:
Thanks to the people who negotiated Comox Lake Road access for us. Note that Mosaic only allows maximum 2 vehicles.
Next time I’d approach from the north of Carey Lakes. Just stay on Crk8000 around to the north side of the lowest Carey Lake where I understand Comox people have flagged a route which goes up between the first & second lakes. 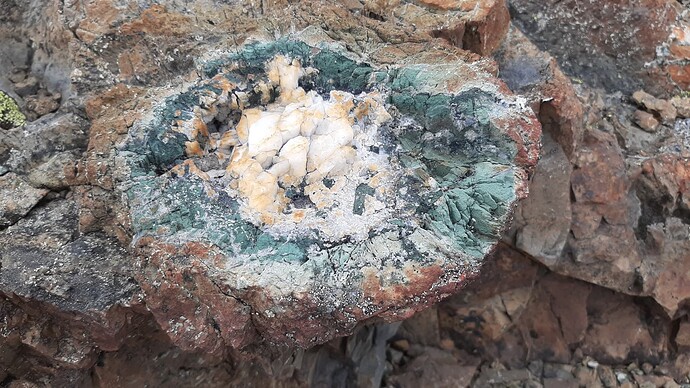 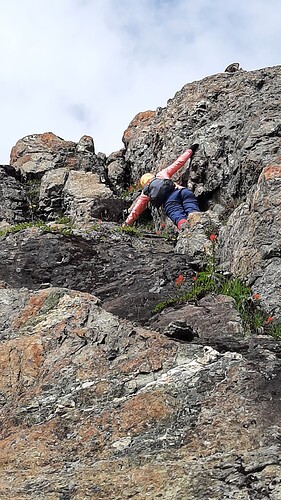 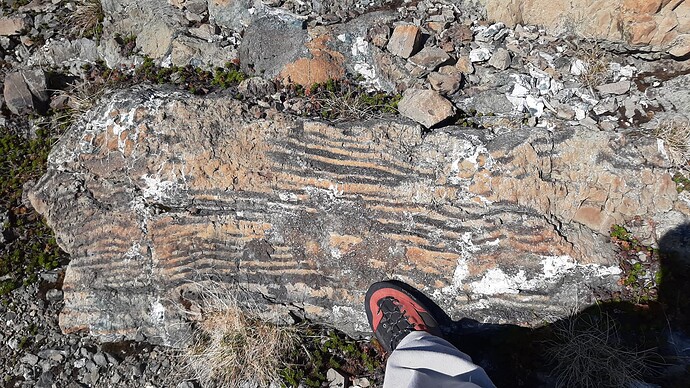 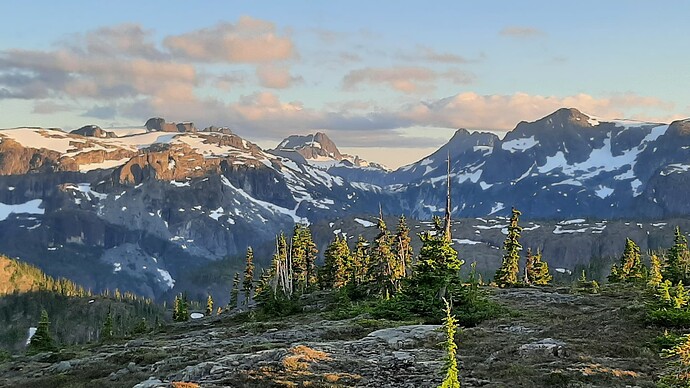 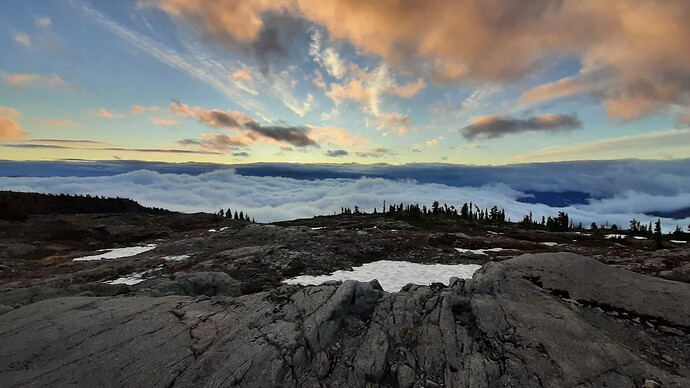 Many thanks for this report Gordon - this was one of the areas we (credit to Barb Baker) were keen to have access to wrt the Mosaic key. Definitely looks like excellent opportunities in there, summer and winter. Great photos!