On December 4th, our group met in Port Alberni one hour before the gates opened to access the climbers trail. We all piled in one vehicle, went to Tim Hortons as usual and then proceeded to drive to the climbers trail which we made it to in great time. Good road conditions and light snow made the drive pretty easy.

Upon arrival, we put on our winter boots and heavy packs and then set off to the base of NF to set up our overnight camp, and enjoy some awesome climbing conditions.

The trip up went very smooth as there was minimal snow and the temps with pretty cold. We made it to our camp for mid morning and set up our camp near lake to the left of the gully leading to the Newman Foweraker route.

After our camp was set up, we ran into another three parties. Very day day on arrowsmith! Two parties were heading to the main gully, and the third (Steve Janes and Danny O’Farrel) were also aiming for the NF route. Those two quickly geared up and made in to the base before us.

As Vanessa was experiencing some cold feet and hands, as well as footware issues, we decided it was best for her to sit out the days climbing and warm up. Casey and I went up the gully and made our way to the base of the climb. Seeing the other group on the climb, we decided it was best to give adequate time before following in order to reduce the risk of ice fall hitting us in pitch one. We ended up climbing the rest of the gully for fun, and burning a couple hours before heading back down and getting on the route. 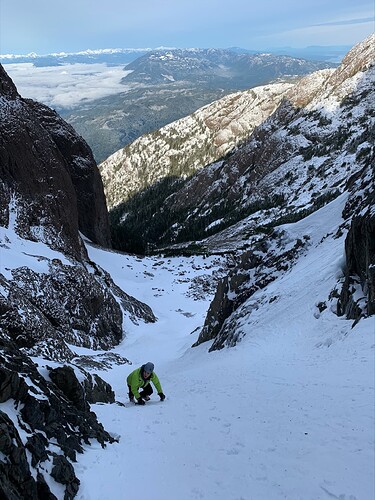 The first pitch looked comparable to the conditions we turned back on the previous trip. The main differenced were there was no melting or dripping ice, and the crux of the first pitch which was previously thin ice and water running behind, was now completely bare and would more of a mixed climb. Casey was confident on the mixed portion and led the first pitch to the anchor placing two ice screws and a nut on the way up. I followed to the anchors and got ready for my turn on lead! 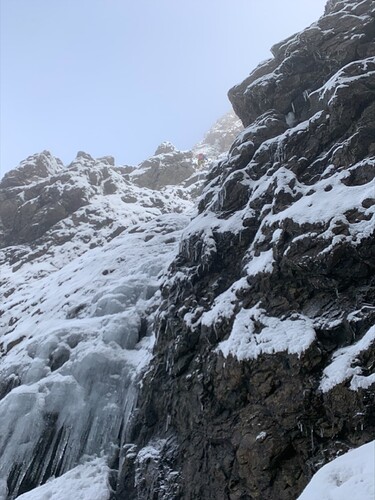 The second pitch had not much ice either, however the mixed climbing element was very exciting and I really enjoyed climbing. This pitch I was able to protect using a few cams. Casey cruised up pretty quickly and at this point, the clock was nearing 3:30 PM and we knew we had to hustle. 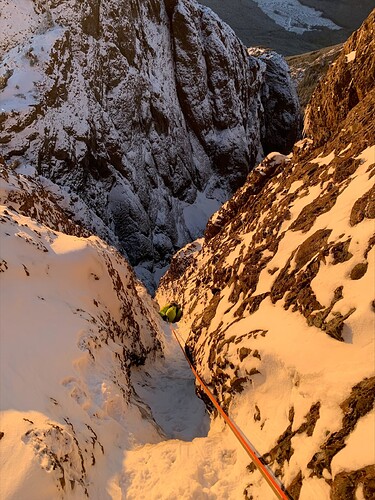 Casey quickly led the third pitch and I followed up to the tree top belay. As dark was fast approaching we decided to not go to the summit and rap down immediately in order to try and make it down before dark. I sent Vanessa a message letting her know we made it up safe and we were on our way down.

At the top of Pitch 2 we arrived, anchored in and tried pulling the rope free. It was caught up! With daylight pretty much gone Casey ascended the ropes and freed up the pull line before coming back down. With the rope moving now, we set up rappel #2 and quickly made it down the next pitch. The rap ring anchors made for an easy way down the rest of the route and we ended up getting to the base pretty quickly. A short down-climb brought up back to camp! 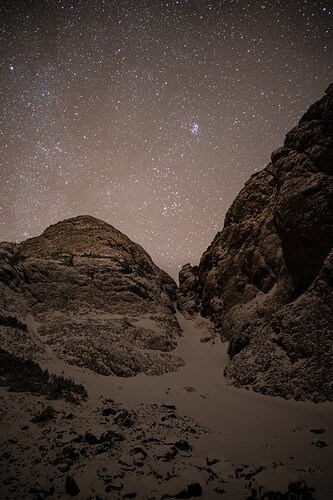 The rest of the trip was spent enjoying the stars and suffering though what turned out to be a very windy and cold night. The minimal snow conditions prevented us from digging a tench for our tent and we had spindrift come under our fly during the night and we woke up with snow inside our tent! Despite use of down booties and double wool socks, Vanessa ended up getting first degree frostbite on one toe and will be losing a nail toe! Ouch! A trip to the ER drained a hematoma under the nail and confirmed the suspicions. Looks like heated socks and double lined mountaineering boots are on her gear list now!