A couple evenings before posting this trip to ACCVI we had a couple people reach out, one of which ended up joining us named Joe Dale. We were excited to add him to our crew and take off early Saturday Morning.

Joe joined us, kindly offering use of an awesome Ford Expedition he had use of through the Soul Edge Leadership Training Program and we loaded up all our group and gear shortly after 6:00AM. We went to Timmies and hit the road arriving to the trailhead shortly before 9:00. The access to Matchlee was great with one cross ditch required to get to the trailhead about a half KM before the parking area.

Leaving the vehicle the weather was foggy with light rain. We made our way up through a small cut-block and entered a dense forrest. From here the bushwhacking got pretty heinous. The next four hours were spent hauling heavy packs through steep, slippery blowdown - sometimes we were navigating over fallen trees without the ability to touch the ground.

As we gained elevation we eventually hit a snowed gully where we stopped for lunch. From here, a bit more bushwhacking, wet blueberry bushes and crawling through devils club got us in sight of the snow basin leading up to the ridge where we would make camp. As this was Kaya and Joe’s first mountain adventure on the island, we joked about a fitting initiation and prepared for the climb up the basin.

Due to the warmer temps and rain, the snow was very soft. Luckily we all brought snowshoes and this helped greatly climbing out of the basin to the ridge. After a few sketchy snow bridges, the route up was very straightforward and we slowly made our way to the top on another couple hours. We were all surprised by the intensity of the bushwhack in and were happy to make camp.

The fog and rain did not let up much that evening. We received a brief 5 minute glimpse of the following days objective that evening and went to sleep pretty early with plans on an early start.

Starting at 6:00AM we geared up with crampons and ice axes and started up towards the NW Ridge. Making the ridge quickly we had a great time hiking up close to the summit where we briefly split off choosing some more exciting terrain to navigate. Casey, Kaya and Joe opted to stay high on the snow while Steph and I chose a lower route which included a few small sections of fourth class scrambling around some rocky ledges. Meeting up for the final summit push, we all made it up top for well deserved lunch and pictures! 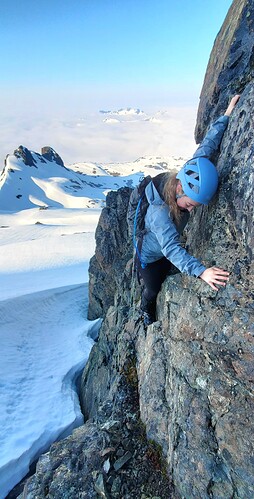 On the way down we decided to head straight down the glacier, practise some self arrests, and meet up with a second group we saw approaching from afar. The group turned out to the IAG mountain fly-in course and we briefly chatted with guide who had lost her phone on the way up. We followed her tracks all the way back to camp however did not find the phone.

Once back at camp, we hung out for a while drying gear and took off down into the fog. The descent was very fast and aside from a couple falls (luckily no injuries) we made quick time back to the vehicle. We went down the first gully instead of repeating the bushwhack which turned into an exciting third class scramble down a river/waterfall all the way down to the meadows. Eight hours up, under four hours down