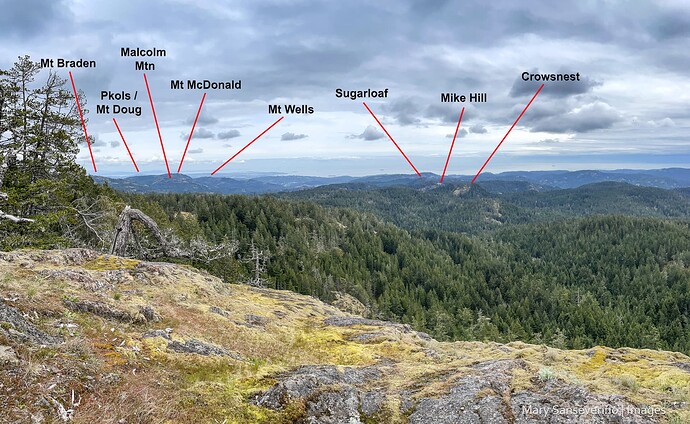 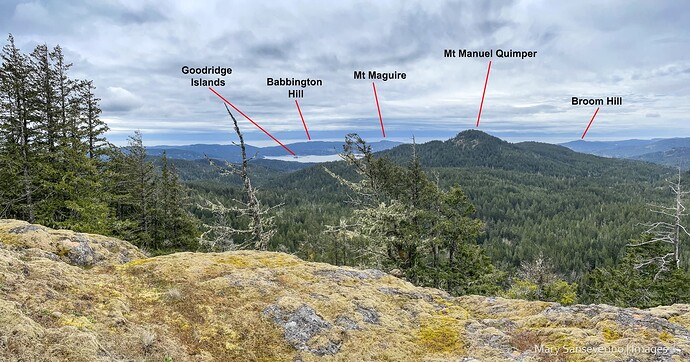 The Alpine Club of Canada – Vancouver Island Section saw “May-vember” 2022 off to rousing start with a flower-filled hike in the Sooke Hills (59 species in bloom – including a crazy double-headed Calypso orchid and a pure white Blue-eyed Mary). The weather was fine – no rain, not too hot, but maybe a bit buggy (now that’s something one doesn’t often say about the Victoria area!). 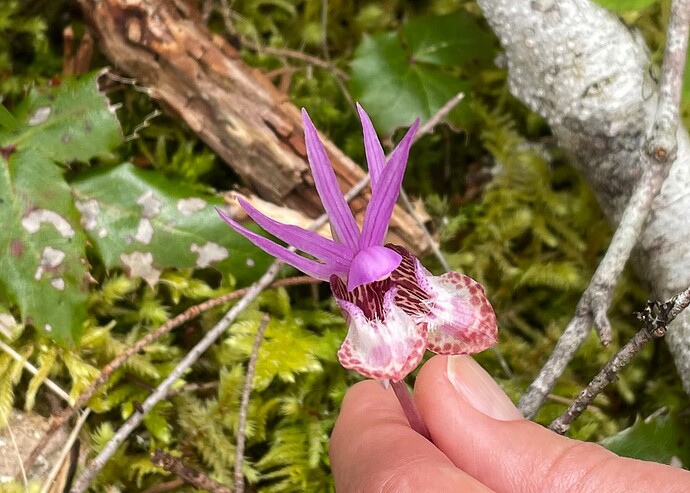 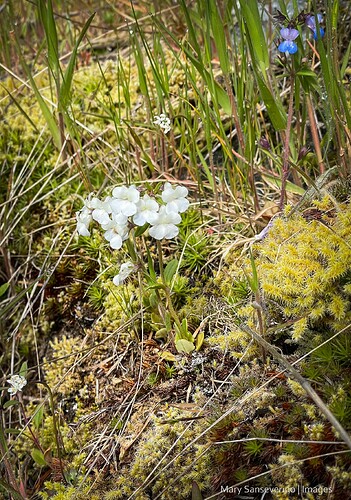 The route was a slight twist on a Sooke Hills classic: up Mt. Manuel Quimper; down and over to Thunderbird via the Waterglass Trail and a little used route to Dave’s Knoll (AKA Little Thunderbird); up T-bird via the regular route; down via some off-piste scrambling on the west side; home on the Sooke Mtn Trail (AKA Harbourview Trail) with a detour via the Willow Trail on the lower west side of Quimper. 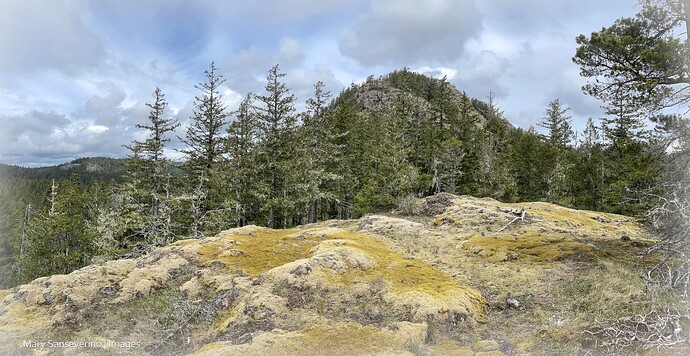 The hike was an opportunity for ACC-VI to participate in the April 30 – May 2 City Nature Challenge. This international event has been running since 2016. It involves thousands of people in hundreds of cities around the world getting out and recording what they see in the natural world around them.

The recording method is quite easy – take a photo of something in nature (plant, animal, bird, insect, etc.) and post it to iNaturalist. This free online community of naturalists, researchers, and citizen scientists will, with the aid of a bit of Artificial Intelligence, look at the images and make suggestions as to what the species in the photo is. However, species are not completely confirmed until another person (not an AI) has looked at the photo and either agreed with the initial ID or suggested something different.

Our team of 9 intrepid hikers recorded approximately 300 observations of plants and animals seen on this hike. We reported them as part of the greater Victoria Capital Regional District’s findings. Indeed, Nicole – one of our group – cracked the top 10 in the number of observations she personally contributed to the CRD’s total. 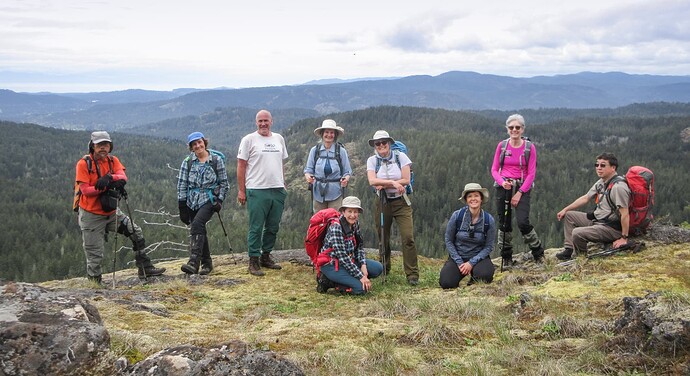 This kind of contribution to understanding the environments in which Alpine Club of Canada members travel, hike, scramble, and climb is nothing new. The ACC has a long tradition of scientific observation – the early Canadian Alpine Journals especially are full of reports on glacial and geologic structures, wildflower classification and description, and wildlife occurrence/density. Our group was pleased to continue the tradition!

Here are the numbers for the April 30 – May 2, 2022 City Nature Challenge overall and the CRD’s contribution to the Challenge:

Greater Victoria / CRD:
Total Observations: 7,847.
Total Species Observed: 1,368;
Total People Observing: 392.
It is interesting to note that Greater Victoria, with only 392 people observing was 58th out of 443 cities in the listing of total species observed. This certainly gives an indication of how biologically diverse our area is. Surveys like this are also a reminder that we need to continue working hard to support (dare I even say increase!) this level of biodiversity.

More info on the Victoria region (including an interactive map):
https://inaturalist.ca/projects/city-nature-challenge-2022-greater-victoria

A big thank you to all of the participants on this hike. A grand time was had by all.

*If you got the reference in the title you were either a teenager in the 1970s, are a fan of The Sweet, or are really interested in the classic UK glam rock scene! youtu.be/7lTwA5xMeTM