In the late morning of 19 Oct, I left the Elk River Trail parking lot and started hiking toward Gravel Flat Camp, were I set up my tent and used the place as my base camp.

As I arrived in mid-afternoon at Gravel Flat Camp, I went around seeking for the crossing point and the initial portion of the hike to avoid having navigational issues that may result in a lost of precious time the next day. The river level was low and there was no issue crossing the Elk River at the time (the rainy season did not start yet). For further considerations, there was a fallen tree, just about 30m south of the camp site, that could be used as a crossing bridge in the event the water level would get higher.

On 20 Oct, I left the camp by 08:00h. This hike is relatively like hiking Elkhorn Mountain Trail, with almost the same features and challenges at every elevation level you’re reaching as you are hiking uphill. The navigation references in Exploring Strathcona Park are still accurate. Other than a few additional flags along the route the book is still consistent with the description (see routes description below). 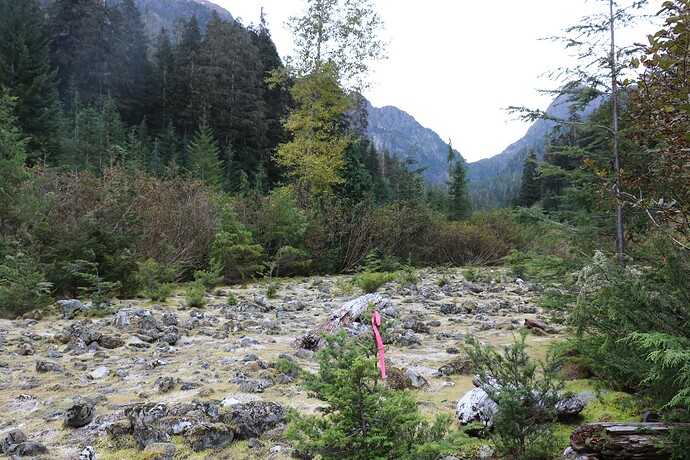 I did not go to the talus after crossing the river, but I went through a few large erratics before going toward a gully creek crossing. Then, I travelled into the old-growth forest up until I discovered a few flags on my way up in the mountain. At the last flag on my way up (marker number 4 on the routes description image below (MGRS grid 10UBA9620118407)), I decided to shift to my left to ensure I would reach the base of Elkhorn Mountain and I reached the gully. The next time, I would go back on that route, I would rather try shifting to the right, from that flag, to reach for the Y junction to avoid going down the 200m slippery gully made of loose rocks. 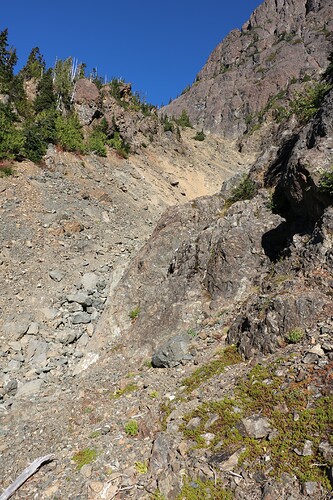 Regardless of what I was thinking, I was in the described trail, the steep gully was a challenge to negotiate; I believed I was doing a navigation error and having to come back this way did not seem to be a safe option. Please, use extreme caution while travelling through this gully.

While I got down to the Y junction, I’ve easily noticed the upper gully. As I was hiking up this gully, I noticed a series of screes and rocks. 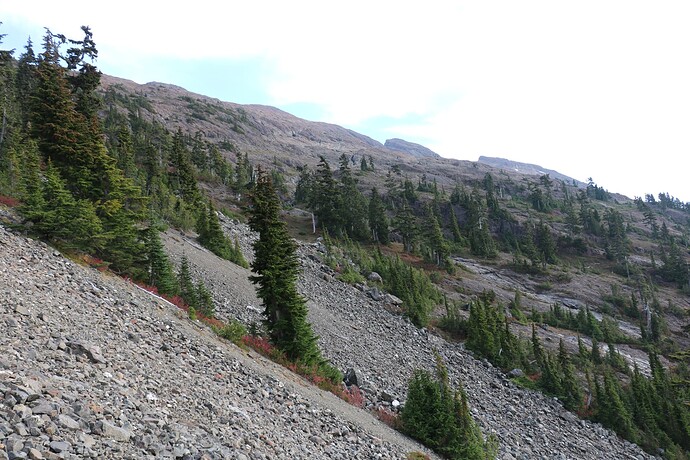 As I left the scree zone, I travelled on a steep slope above the tree line until I reached the summit. I approached the summit by its right side (south), first reaching a saddle before summiting. 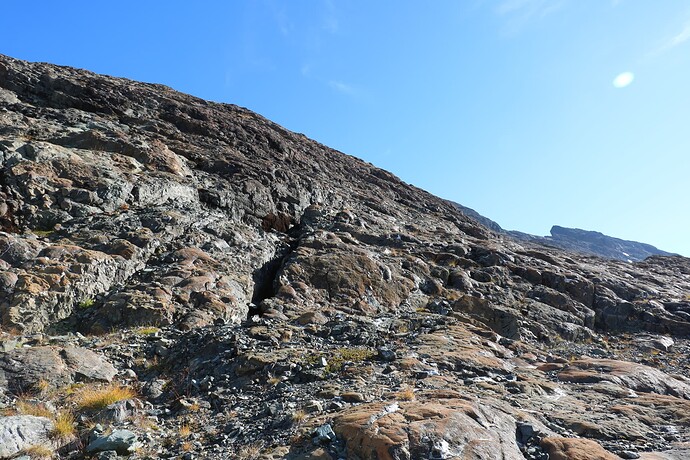 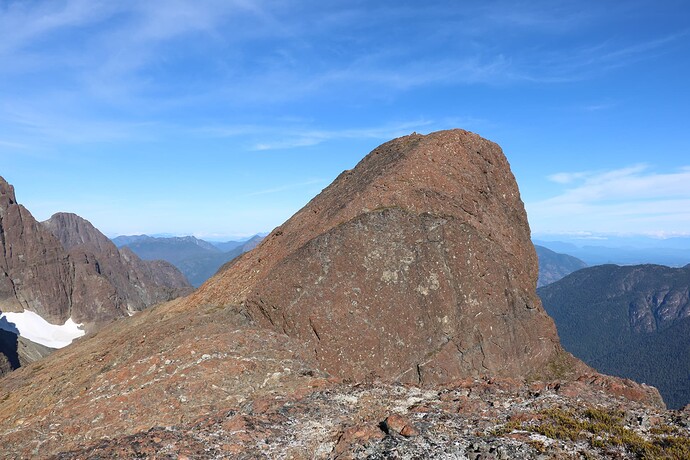 At the summit, the cairn is still in place with a booklet that has about 30 entries since it was placed there in 2006. The view was excellent, clear and sunny. The smoke emerging from the wildfires in the sector of Golden Hinde did not affect the view of the region.

On my way back, the route was self directed, as I was able to see the Y junction. As I arrived at the Y junction, I decided to climb directly into the rib of the gully to avoid having to hike it up. 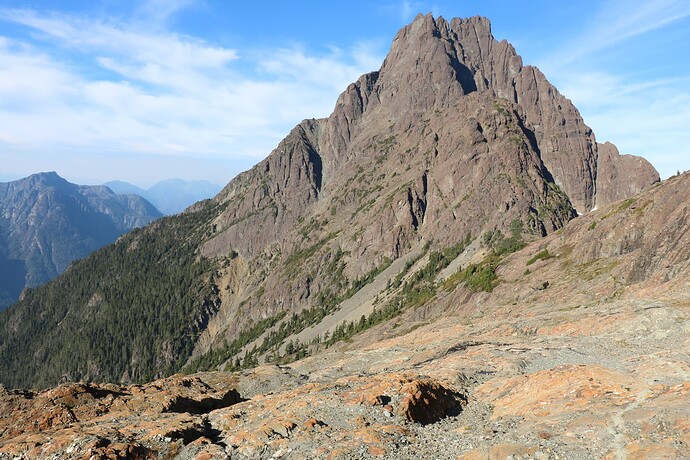 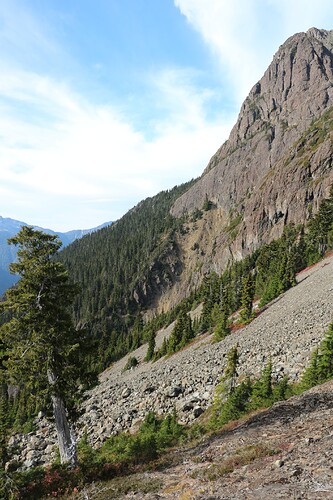 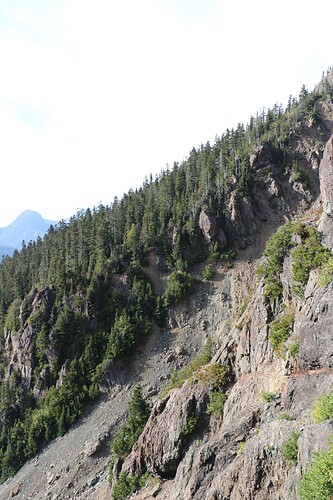 When I reached the upper portion of the gully, I was in the forested zone, and it was easy to navigate down to the route I had taken to come up. 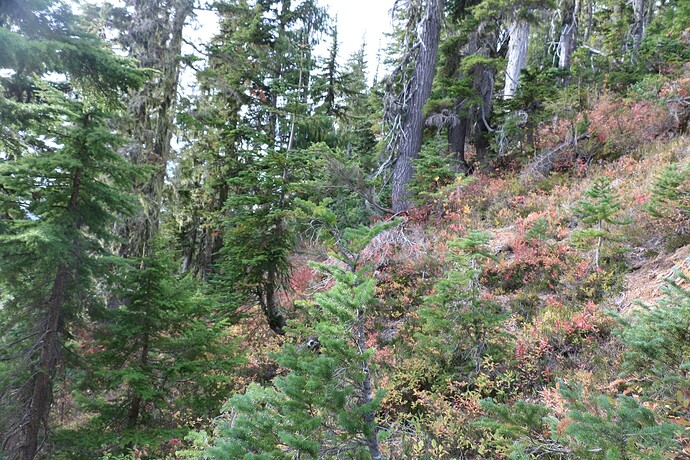 Route (see routes description below, red for the way in and green for the return in the image below)

Flags seen on my way up (I used MGRS grids for the flags): 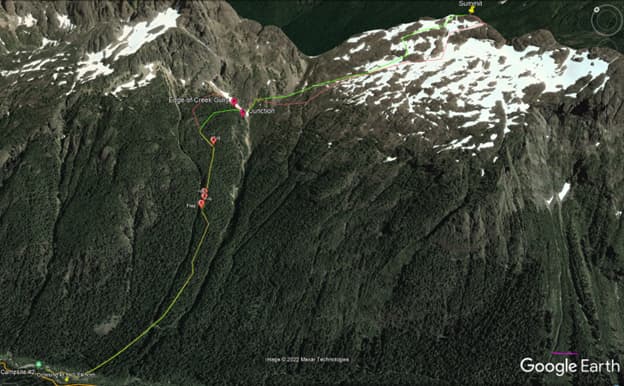 Departure from Gravel Flat Camp was at 08:00h (just after sun rise);

There was no water point in the tree zone, the only water points were located, in the last portion of the hike, on the rocky slope before reaching the summit.

Also, camping is possible on the slope on the rock slab. After crossing the last screes there are a few flat spots.

Nicely done, Joel! Your report looks great and the adventure sounds awesome! Happy you’re home safe. I’m curious: did you have an InReach or Spot or other kind of emergency signalling device with you on this trip?

I started using the InReach service two years ago, when I did the Golden Hinde Traverse (Elk River to Myra Mine). My friends could track the evolution of my trips. Additionally, I usually text them as I’m passing through precarious zones and when I’m back to safety.