The original plan was to spend a few days climbing in Skaha. As we started planning the trip fires broke out in the Okanagan and Skaha was closed, possibly until mid-October. So we started looking at Plan B, I was planning other trips that would put me in Castlegar around the same time. A little bit of searching revealed a number of interesting climbing areas in the Kootenays, ranging from easy sport climbs to multi-pitch sport climbs, easy trad and some interesting alpine climbs as well. Even though most of Skaha did in fact open before the trip started, we decided to go and explore some new areas around Castlegar anyway. As the dates approached the smoke rolled in and we started looking at Plan C, fortunately the winds changed and Plan B it was. As the smoke cleared away the forecast started to show some rain in the forecast. Nevertheless we were optimistic and we decided to go ahead with our plans.

On Monday we all arrived in Castlegar and set up camp at Pass Creek Campground, we were given the group campsite which included a shelter in case the weather did change. Most of the crags around Castlegar are described in Mountain Project (website and app) and using this information we decided to start with some moderate sport routes on Polished Wall in the Kinnaird Bluff area. We filled in the online waiver at the TAWKROC website that evening. Tuesday morning we headed out and picked up the guidebook from the Chamber of Commerce and headed for the bluffs, a 10 minute drive from town. Unfortunately the Polished Wall was too new to be in the guidebook but we had a brief description of access from Mountain Project, “Hike up and left of Open Book Wall”. So we found what we believed was the path and hiked up and left. There were cliffs and bolts but it didn’t fit the description of Polished Wall. Eventually we hiked further left and further up and found the wall and immediately recognized it as Polished Wall from the glacier smoothed rock. We started out on the right side on a 5.7 sport route called Muglugs Goes Climbing. The rock was good and the grade felt about right so we did some other climbs there, Shaun’s Pawn Shop S5.8 and Reflections S5.8 2 pitches. 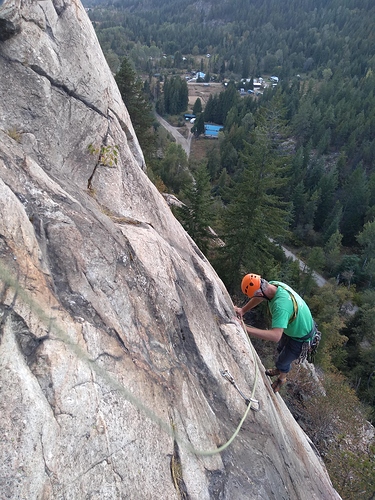 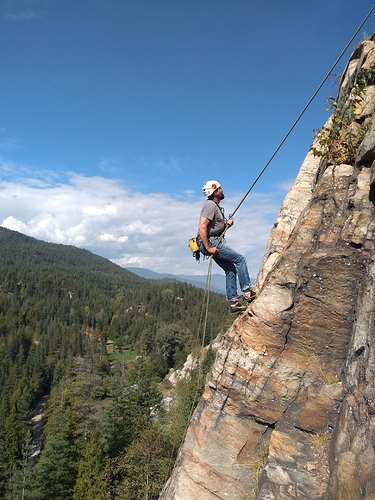 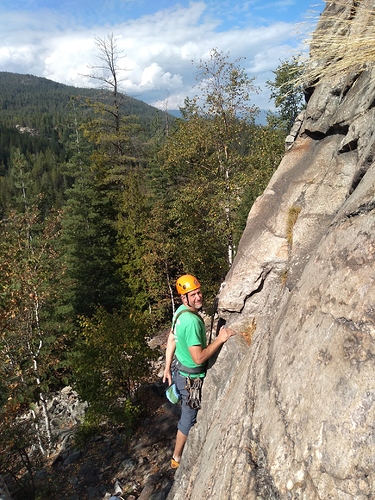 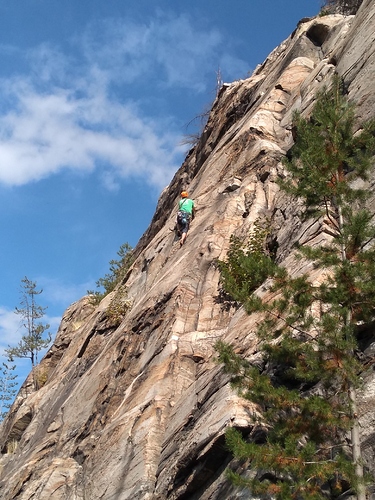 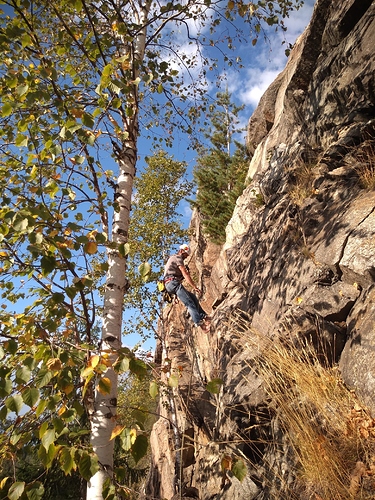 The rain held off on Wednesday so we headed for another new bluff, a few minutes from the campsite, Grad Wall, so named after the graffiti on the wall. We climbed a few of the routes there Prom Date S5.7 2 pitches, Pass or Flail S5.9, Pump & Circumstance 5.10b before the rain started. As forecast the rain continued all evening and into the night. 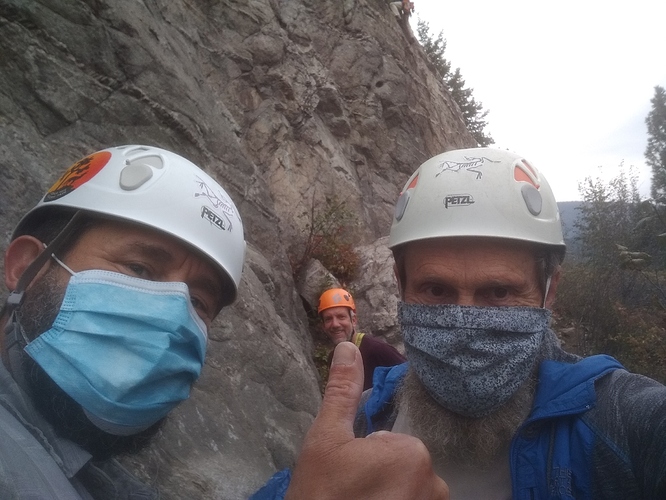 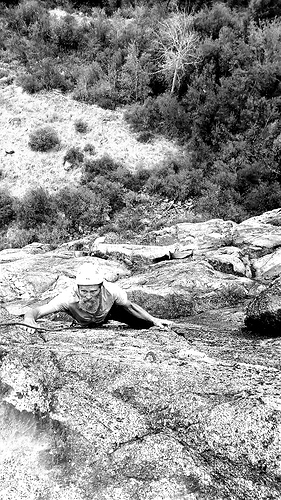 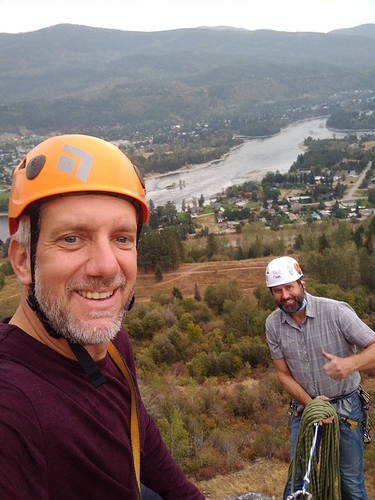 Thursday morning the rain had stopped and we had heard from the locals that the cliffs along Arrow generally dried out quickly so headed out that way, still only a 15-20 drive from camp. We started out on the slabs at Waterfall Walls and then did a highly rated S5.9, Badger. After that we moved up the road about 50m to the Zebra Wall for some climbing on the black dyke routes Missionaries S5.9 and Maniacs S5.10a. After that we felt that it was time to head to the pub, before settling in we took a look at the Pub Wall in the parking lot of the pub and saw some nice routes for another day. 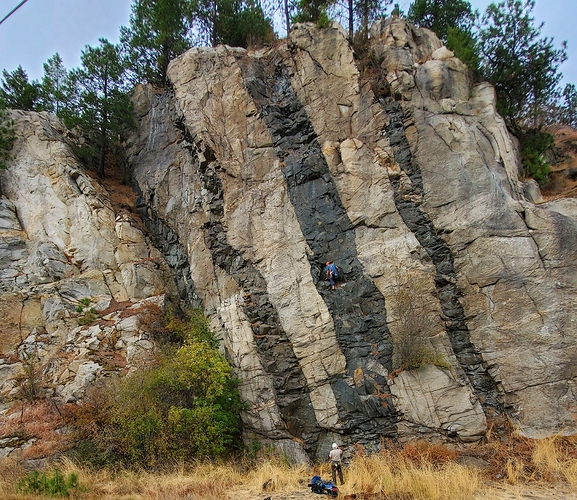 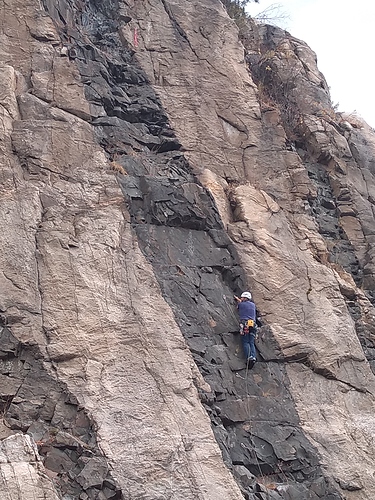 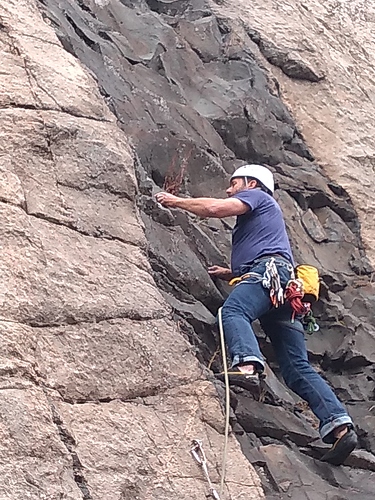 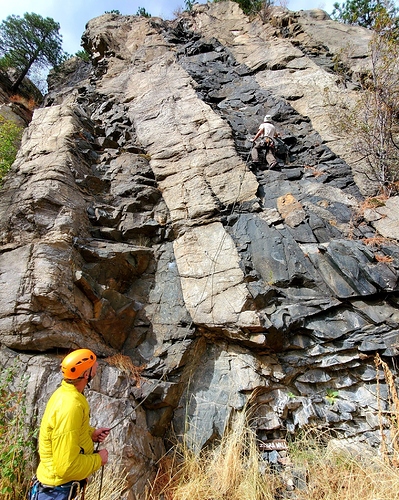 After managing to avoid the rain, we were not so lucky on Friday. So we hung around, caught up on emails, read books for the day. We hoped that Saturday would be another climbing day, the forecast was for the rain to stop overnight and a 10% chance of showers until later in the afternoon. As it was only Jordie and I, we took a chance with the forecast to climb Megawatts an 280m 8 pitch 5.8 sport route. Some areas were a bit wet but we headed for the crag anyway and found it to be sufficiently dry so we started up. There were a couple of very brief hail showers but not enough to affect the rock. We swapped leads through 4 pitches of 5.8, and 1 each of 5.7, 5.6, 5.5, 5.4. A super fun climb with varied climbing and views down to Castlegar and Arrow Lakes. From the top it was a walk off and a hike down a trail. Along the trail we found enough Lobster mushrooms for a Lobster Alfredo pasta dinner that night. 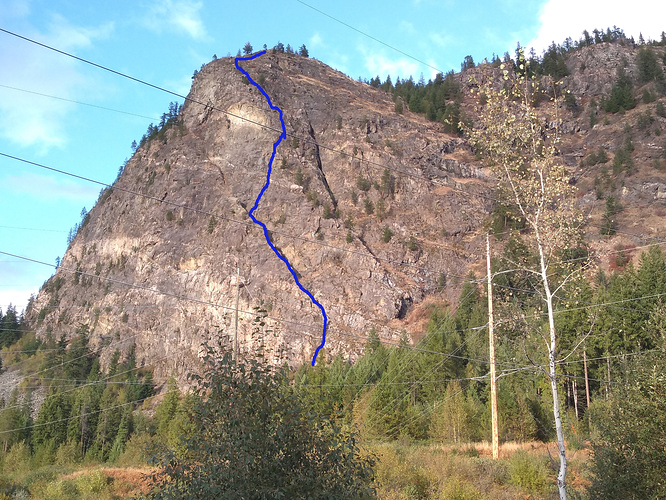 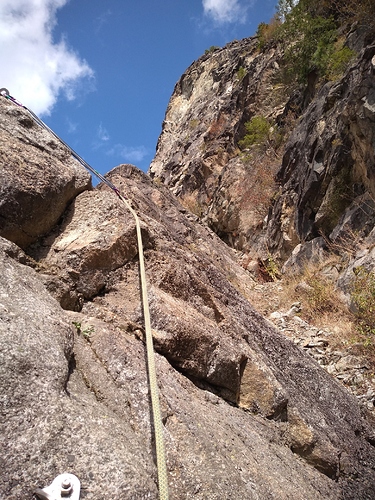 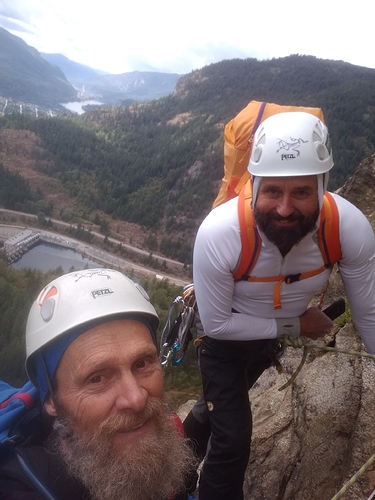 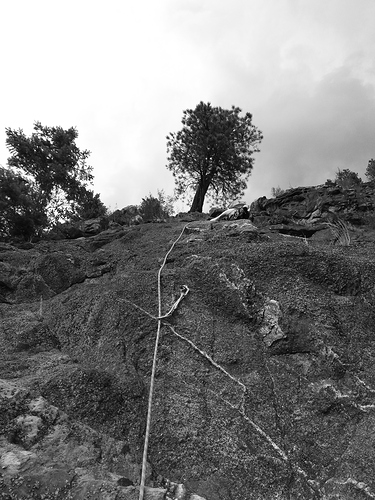 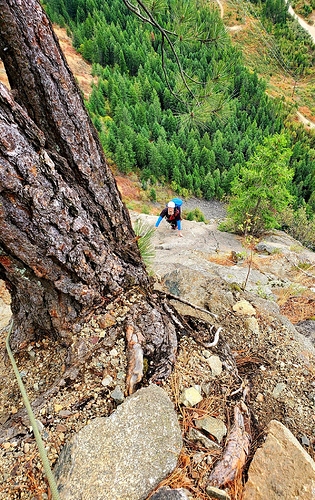 Thanks to Jordie for allowing me to use many of his wonderful photos.