Roger and I had wanted to explore this unique area in Strathcona Park for many years and timing and circumstances finally came about to go. We posted a 4-day backpack trip in order to access the key to Comox Lake Main, and that all worked very well. Thanks to Val and Lindsay for being the keepers of the gate keys, radios, Mosiac waivers and other information on accessing the logging roads. We had hoped for 5 participants, but sadly one had to drop out the day of departure due to a previous ankle injury that was acting up. So four of us (Roger, myself, Jim & Anna) ventured out early on Sept. 16th from Cumberland and encountered no logging truck traffic en route to Carey Lakes - our starting point. We had several GPS tracks from Matthew Lettington, Dave Suttil and Walter Moar which were super useful - thanks to all of you!

Although rain was forecast we had a party overcast/partly sunny day with moderate temps - perfect for backpacking. We started out on an old ditched logging road for several kms and bush crashed to one of the Carey Lakes where we picked up a flagged route, sometimes trail and sometimes bushy, that lead up to the ridge that would eventually intersect with Rees Ridge. 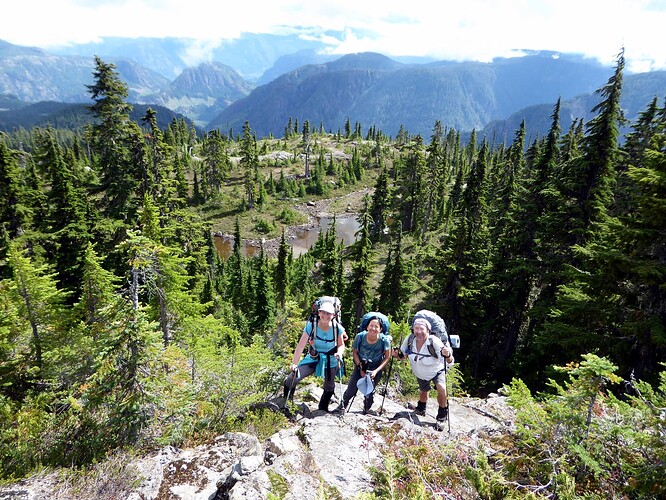 P10402151920×1440 600 KB
It was a lovely area sub-alpine area with extensive views, lovely rock and small tarns. This was truly a gem of an area to hike through. Our intention was to get to a camp spot close to Mt. Siokum and Rees Ridge on day 1 and we were able to do that at a very moderate pace with breaks in 8 hours. The fog rolled in just around the time we arrived and were setting up camp, but rain held off. 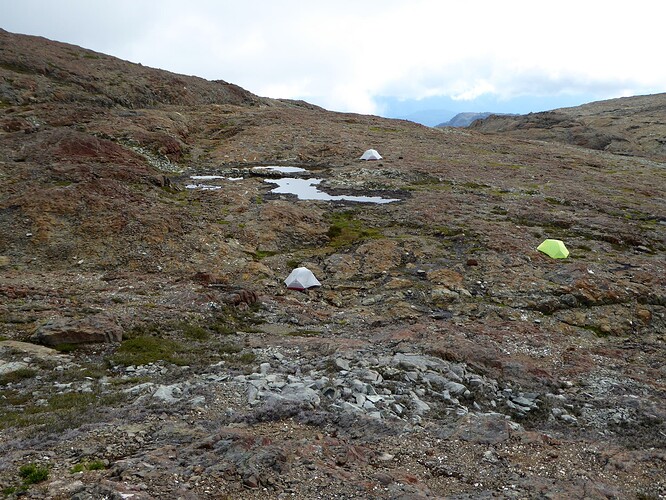 Overnight there was wind and a bit of rain and we awoke to a cooler foggier day. Very happy we had built in an extra day, we opted to sleep in or hang out in our tents and get up later to see what the weather was doing, We had a late breaky around 10:30 AM with some breaks in the fog and decided to use the day as a rest day and then hike over to Mt. Siokum, only 2 km away. So that was a fun outing with a small amount of showers and we used our tracks to navigate up Siokum to a summit view of 360 of fog! But we did enjoy some interesting rock formations along the way with peek-a-bou views now and again. 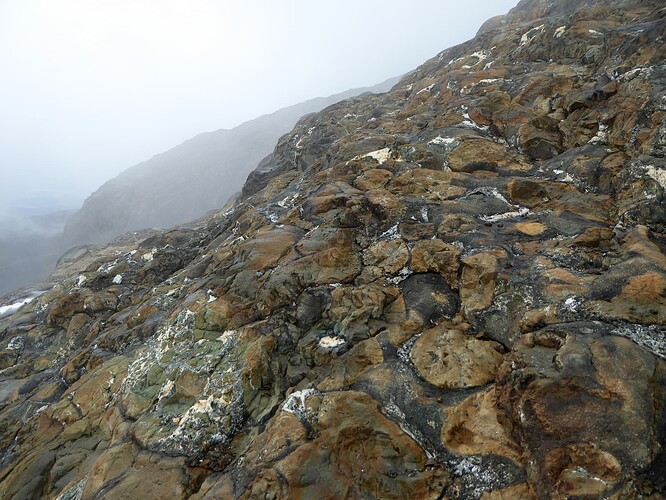 P10402481920×1440 372 KB
This was only about a 2 hour outing and we retired to our tents again for a while. Then around 3 PM the clouds and fog disappated and the sun came out. Excellent…as this was the predicted weather for the next two days! We had a wonderful view of a stunning sunset from a small hill above camp that night with direct views over to the Golden Hinde, Rambler, Elkhorn, over to Mt. Washington and elsewhere.

Day 3 dawned beautiful, warm and clear and we headed out early at about 8:45 AM finding our way down off our camping plateau through a broad gully and up to the next plateau and Rees Ridge. 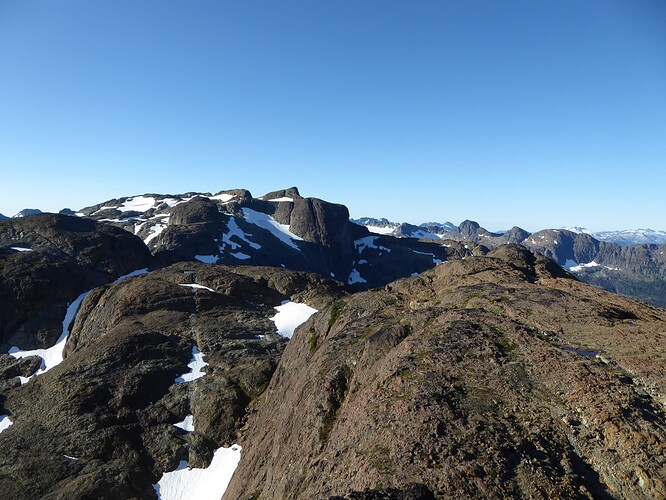 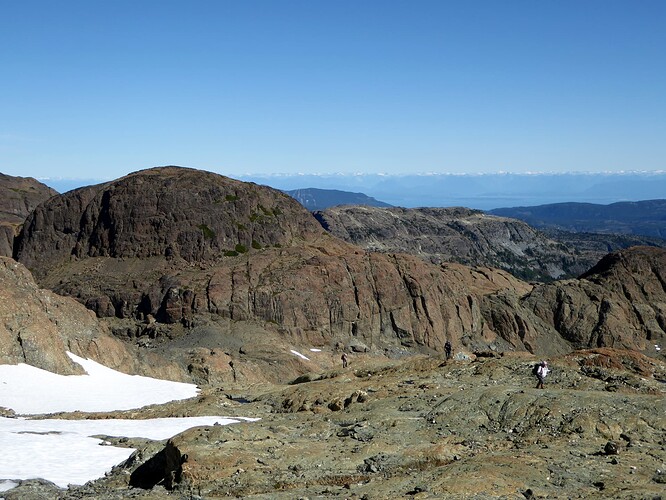 We followed the height of land and hit a couple of high points along the way and easily reached Celeste Peak around noon or so and had a good lunch there taking in the tremendous views. There was a bit of smoke but nothing horrendous that spoiled the views or taxed our lungs. Another hour and a half got us over to Iceberg Peak with more stunning views. 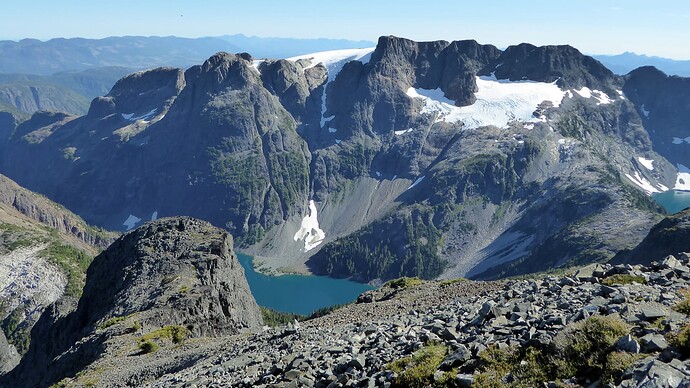 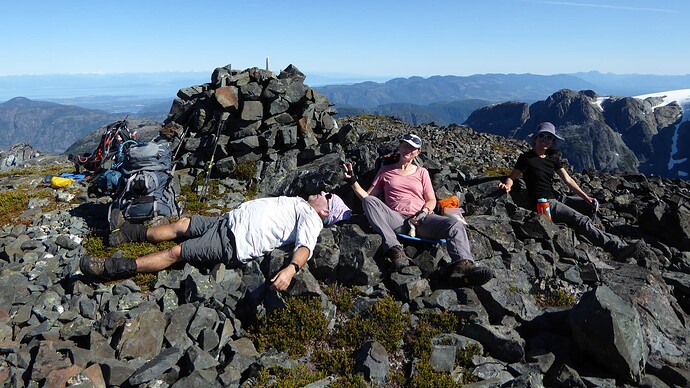 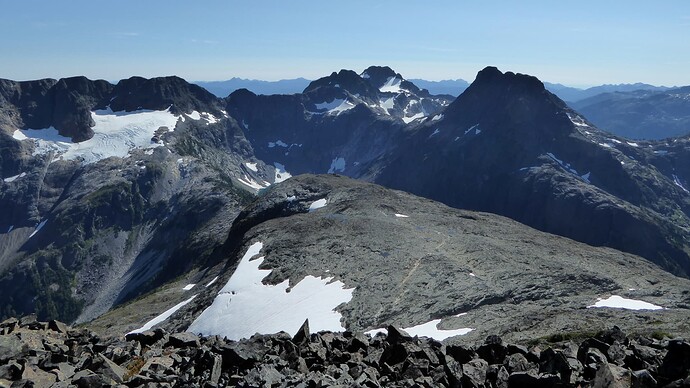 P10402901920×1080 234 KB
Both Roger and I had noted a potential route lower down to the south of our track that would likely be more efficient for the way back (less up and down, more snow travel, and tarns along the way to fill up water and potentially dip in). 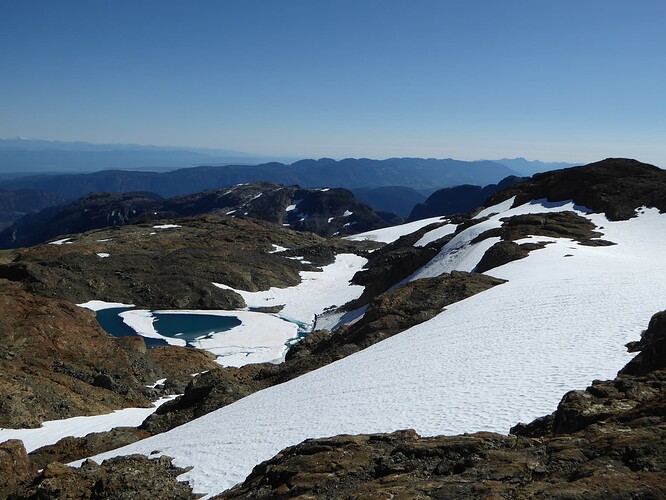 So we proposed that to the group and all were game, so we went off the “track” and forged our own route. It was brilliant and saved a great deal of time and energy on the way back. Roger, of course, had to dip into the largest tarn/small lake while the rest of us snacked, filled up on water, and found a wayward phone that dropped out of a pocket! We continued on this lower elevation route to make a really nice loop back to camp and were happy we found it, as it was a biggish day. We all made it back to camp by 6:30 PM. Perfect timing for dinner and viewing an even more spectacular sunset from the rise above camp. What a fun, satisfying day out! 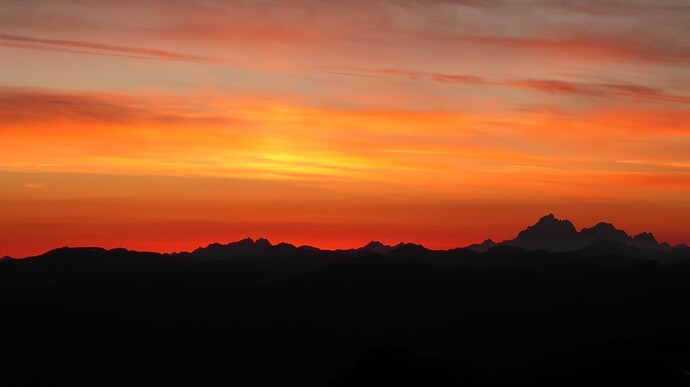 So Day 4 required an early rise to pack up camp and head out by 8 AM to backpack out and back to the car. On the way back Roger spyed some other potential routes to save time that we took and indeed did save time. Those routes were semi-flagged or cairned and had partial trials here and there, so this good idea was not a new one! We saved enough time, that we decided to take a slightly different route back using the Carey Lakes trails and avoiding the initial bushcrash. In spots there were short bushwacks, but nothing like the first day. The time saved allowed us to pause at one of the Carey Lakes for a snack and dip break - most welcome as it was a warm day. Arriving at a different logging road around 3:30 PM, Roger offered to drop his pack, walk back to our vehicle on the other road about 2 km away and bring it back, while the rest of us chilled at the first Carey Lake.

I figured he would be about 45 minutes, but when an hour rolled around, I was starting to get concerned. We left the lake in order to meet him at the road so that he would not have to wait for us. When he arrived just shortly after 4:30 PM, we heard quite a story. He had one bear encounter walking along the road initially, but the bear only paused to look at him and carry on after Roger gently told him “you are a pretty bear and all the berries are over the other side of the road away from me!” Arriving at the car he found we had a flat tire…ugh! So he set about changing it, having to do some digging with a rock in the logging road, to extract the spare from under the car, and again having to dig beneath where the tire would go, due to sloping of the car and the tire not being able to fit on with our small jack! While all this was happening and he was laying on the ground digging he heard a sound of bushes and thought we had walked to meet him and made a comment like “I guess you decided not to wait” only to look up to see it was not us, but another bear! Well he felt a bit more intimidated in this position and reached for a knife he had brought, all the while talking gently to this bear using the same line. This bear was within 10 ft or so and took a step towards him, wondering what was going on, did some sniffing, and then also decided to go off into the bush to check out those berries Roger was talking about. Yikes…what an adventure!! So when Roger got to us he had the flat tire in the back of the vehicle and needed another set of hands to get it under the car into the awkward area where the spare is stored. Jim and Roger handily took care of that, we loaded up, and were back in Cumberland by 6:30 or 7 PM and enjoyed a great meal at the Waverly Pub.

This was truly a lovely area to explore and wander in and I would highly recommend the area!

Thanks Peggy. I have this on my radar, and come-the-time this info will be very useful. It looks glorious!

It is glorious. If you want to explore the area further, I would take even 5 or 6 days in the area as you can go up to King George V as well. It is a speacial area.