The Campbell River Divide; A 225km, 22 000m+/- alpine route following the height of land over no less than 33 peaks (up to 45) surrounding the upper Campbell River Watershed.

The following report details our trip over 14 days and 26 summits, completed by Kyle Bourquin, Casey Matsuda and in part by John Relyea-Voss

Day 1: Our trip started at the Mt. Lupin trailhead and continued following the Vancouver Island Trail for a day and a half. The route finding over Mt. Lupin and Mt. Beadnell to the Beadnell Headwall was quite straightforward and aside from the sweltering heat and armada of mosquitos, it went well. We traversed under the steep rock walls and buttresses until we located a boulder gully on the lower West end of the headwall. Ascending it that went smoother than expected with a few 4th class moves. Finally arriving to camp on Adrian’s west shoulder after 14 hours, we quickly hit the summit as the sun set. The newly smoky skies made for a seemingly over-edited array of colours.

Day 2: The next day we descended the SE gully towards Alexandra on broken snow and avalanche debris. At only 8am, the inclement heat was already showing itself, so we quickly crossed the logging roads and began up the shaded West Gully of Alexandra. Although not described as part of the CR Divide, Alexandra seems to be part of the upper watershed so far as we could tell. The climb was a straightforward 3rd class scramble and quite fun, but VERY hot! After descending the route, we beelined for the high logging roads on the SW aspect and lethargically made our way down the stifling dusty roads to our respite at Pearl Lake.

Day 3: After an early start, we chose a prominent forested gully directly above Pearl Lake to gain the Augerpoint Traverse. It had some tricky route finding with several small cliffs and ravines but went well. After collecting our first food cache, we hopped on the Augerpoint Trail and quickly found ourselves on Peak 1760. From there, we made a fast and light ascent of Syd Watts, then Augerpoint before descending to the exquisite Ruth Masters Lake for the night.

Day 4: Getting up to Albert Edward and over to Frink was the uneventful slog you might imagine it was. However, the route down from Frink posed a bit of a route finding challenge with us losing the way and setting a short rappel. When the rope became stuck, Casey had to ascend and reroute it. Although we planned to sleep in the pass, high energy and the allure of a summit camp coaxed us on. 3 hours later, we were on top of George V. After setting the tents, I dug a 3ft hole in the snow to find some ice for our well-earned Old-Fashioned’s. What could be more bougie than a summit cocktail with actual ice during a heat wave?! 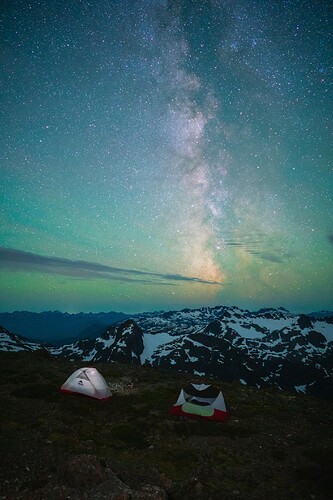 Day 5: The goal for the next day was Mt. Celeste and what a beautiful area that is! Walking along the ridge from Siokum towards Celeste is quite incredible! Standing atop those 350m sheer cliffs was spectacular. As were the views of many ink blue lakes, such as…well… Ink lake. The 2 route finding challenges between George V and Mt. Celeste went better than expected thanks to the excellent information in Exploring Strathcona!

Day 6: Our last day with John started at the crack of dawn. As a group we were a little unsure how the route up the Comox–Argus Col would go in the current conditions. We wanted to leave enough time for a plan B route around Milla Lake and up to Argus. In the end, the route went surprisingly well with short 4th class sections and decent rock quality. Meeting up with Stephanie, Kaya and Melissa later that day was a great moral boost and I can’t thank them enough for bringing our food caches up from the Frog Ponds! We spent the afternoon rambling around the summit block before being blessed with another truly incredible sunset!

Day 7: After a very relaxed morning, Casey and I parted ways from the others and headed on to Mt. Tzela. Reversing the SW Ridge of Harmston gave us our first pitch of actual climbing. After a short 5.7 pitch we wondered why exactly we had carried 6 cams, and 2, 35m ropes up to this point. Better safe than sorry I suppose, but also a lesson learned for next time!

Day 8-9: The next day was sideways rain with zero vis. Drenched but successful, we summited Tzela and Shepherd Horn. The following morning started out the same but got better as the day went on. The route finding issues weren’t bad, with a small section into Price Pass requiring some thought. The true divide ascends the Misthorns from Price Pass but we wanted to do the full summit traverse, so we headed up under the East Face and along to the South Shoulder.

Day 10: We started up Margaret Peak around 8, leaving our unnecessary weight in camp and planning to back track in the afternoon. The summit traverse from Margaret to Rosseau is quite awesome, if it were separated from the Septimus section, it would surely earn more stars in the guidebook! The route is a knife edge ridge with great rock, tons of exposure and glaciers on both sides hundreds of meters below. Honestly, it’s such a great route! The rock quality nearing Rosseau gets a little suspect at times, but once you pass it and venture towards Septimus, it becomes absolute choss, almost comically so! After reaching the summit of Septimus, we rappelled the “2V” route and hustled back to collect our stuff. Knowing this would be the last bit of service we would have for several days, I checked the forecast. Much to our dismay, the following week was filled with heavy rain, lightening and high winds. With the day light fading, we put the pedal down and arrived to Cream Lake just as the alpenglow illuminated The Citadel behind us. A few more friends had hiked out to meet us here, the cold beer and cinnamon buns were quite the treat!

Day 11: The plan for this day was to gain the height of land above Baby Bedwell Lake. Once we arrived at the lake and waved our friends goodbye, we knew we had to make a decision regarding the weather.

I had previously organized for a few friends to meet us near the Carter Drop on Phillips Ridge for the Golden Hinde Traverse, and to bring in our food caches for that section. In hindsight, that was a mistake on our part. We both felt it wouldn’t be fair to ask my friends to hike in a thunderstorm to bring us our food, and then to continue hiking in poor weather for the next 5 days. We considered hiking out Phillips Ridge and getting the food ourselves. But with a tight schedule and the deteriorating state of my aching knees, the addition of 2 days to the remaining 14 seemed unwise. After a long conversation we made the difficult decision to pull the plug on our mission. We spent the night at Baby Bedwell and celebrated our effort with perhaps a bit too much wine…

Day 12: With 2 good days left before the storms arrival, Casey suggested embarking on the bushwhack to Moyeha and Thelwood might be a wasted opportunity. Nine Peaks after all, was “just over there!”. Having oggled the postcard peaks for the previous weeks it appeared a proper plan. We turned around and for what seemed like the 10th time this summer, hiked up the Bedwell trail. After setting camp in the NE Cirque of Big Interior we gorged on our new found abundance of food.

Day 13: Just before sunrise, we started up Big Interior and summited around 9. Getting to the Beauty Glacier from here was more straightforward than I had imagined. We roped up for the glacier and before we knew it, we were on the summit! We used our summit service to confirm our ride and began the long slog back to Baby Bedwell. At this point in the trip, we were anything but spry and it took us a long 16 hours in total.

Day 14: Was simple; hike to the trail head, then 7km to the highway (our ride had a small car and didn’t want to head up the gravel road). A bittersweet end to a long and amazing trip!

After some convincing, I view our mission largely as a success. Even though we didn’t succeed in our original goal, we both completed our longest and most ambitious trip to date, injury free and in good spirits!

If that’s not a success, I don’t know what is!

4 days later, we came back out with Laurel Mitchell and did a 3 day hike mostly along the divide route.

We started on the Bedwell trail (yes, again), gaining the height of land above Baby Bedwell and dropping to Moyeha lake. After a several slips, trips and falls, combined with a whole lot of soaking wet bush, we decided we would rather go for Chinese food. We pointed the compass at Jim Mitchell Lake and hiked out to the road. Here we were confronted by a bear that was a little too interested in us. We slowly walked backwards for about 30 ft as it followed us before heading off into the bush. This was the 2nd unsettling bear encounter in the Bedwell area for us that week. I would advise everyone in the area to carry bear spray, they seem to be getting a little too brazen around there these days…

I want to say Thank You to the ACCVI for supporting us. It was an honour to receive part of this years Memorial Fund.
I also want to thank Hornby Organic for the tasty bars, we never once got sick of them!!