An early start at 4:30AM from Campbell River took me to the trailhead of Nymph falls where I met Lance for an early morning carpool. Isaiah met us at the trailhead and we took off at 6:00AM; Myself and Isaiah with touring skis and Lance with snowshoes. The temps were cold and the skies were clear! The previous days trips gave us an amazing boot/skin track all the way to the falls. 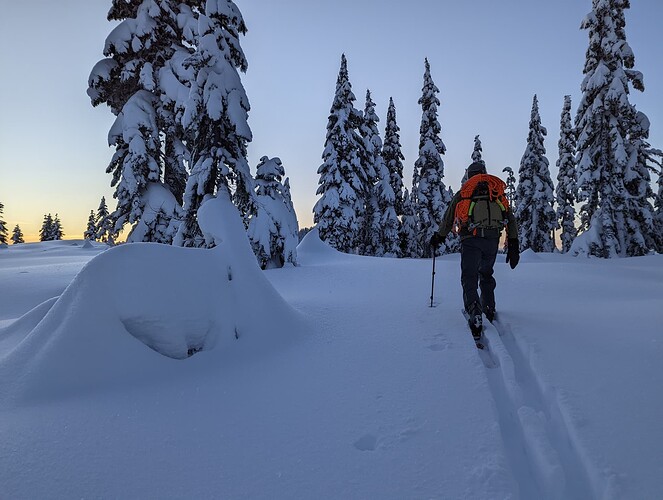 Taking our time and enjoying the views, we made it to the lake below Boston Falls just before 10:00AM. We took some pictures of the climb ahead, crossed the lake and booted our way to the cliff below pitch one of the climb. The ice was looking thick and protectable. We were feeling very excited for a great day of climbing.

Upon seeing the climb, Isaiah wanted to go on the sharp end of the first pitch. The longer second pitch looked a bit more committing from the ground and as we were climbing in ski boots, Isaiah was not 100% comfortable on pitch two. We geared up, and Isaiah climbed pitch one, topping out into snow. He made his way to the base of the second pitch where he put in some ice screws, made an anchor and belayed lance and myself up on doubles. Isaiah used plenty of protection ranging from stubbies and screamers, to 16cm screws. Great quality placements. 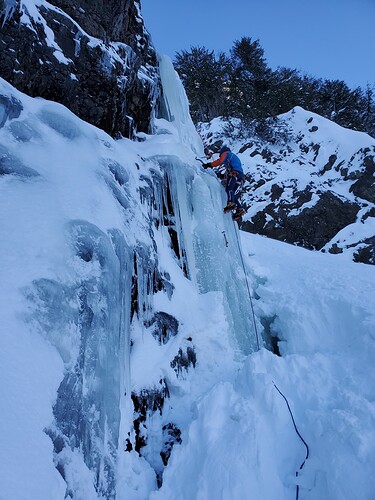 The second pitch had some great featured ice and was not quite vertical. It made for some great climbing and made it easy to search out high quality screw placements. During the first 40m I used seven screws and had a blast making my way up to the upper curtain. Assessing my remaining screws (2 - 16cm and one long 22cm v thread screw). I radioed down when I found solid ice and decided to make a hanging belay to bring up the other two. I used the two 16cm screws with a quad anchor and also sunk the 22cm screw to anchor myself in place just beside the belay station. Lance and Isaiah quickly followed and we were at the upper curtain ready for the crux pitch shortly after. 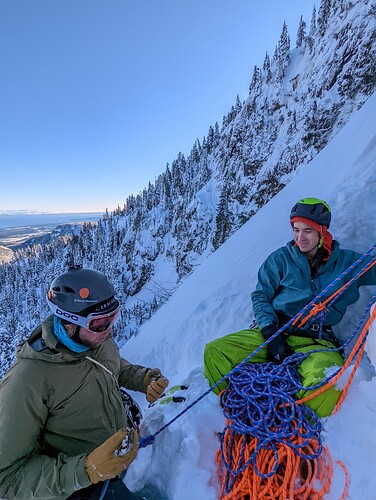 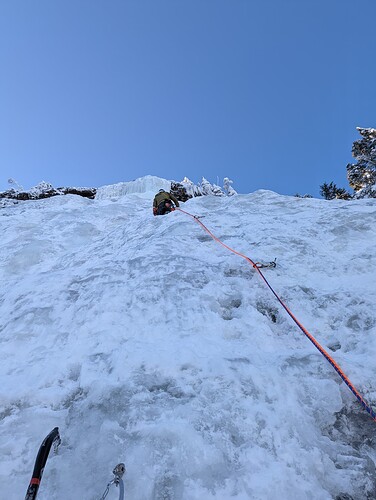 Isaiah came up last from pitch one cleaning the gear as he went up. With a full butterfly coil on my lap, I recommended Isaiah lead the last 20 feet quickly and make his way to the trees up top for us to follow. Looking at the last section, it looked pretty straight forward and Isaiah took off. Reaching the base of the upper curtain in a couple minutes, Isaiah tried to unsuccessfully place a few screws at the base of the crux and after having a tool break off a hold on the vertical section, he decided he was uncomfortable with the lead (in ski boots) and decided to come down to the anchor. We decided to swap ends and I took the rack and tied into the sharp end.

Thanks to Isaiah’s placements I climbed to the base of the upper curtain on top-rope and quickly made it to the crux section. With three screws of various sizes I searched out a good waist high placement in rock hard ice and tried to set a screw. After inspecting the screws, ice from our previous placements froze to the inside of the screw and I had no way of clearing them! The next 30-40 minutes I kept trying various locations and screw placements unsuccessfully. We saw a second party come up below and the lead climber recommended a right traverse to a more easily sloping bulge unprotected. I took a test swing into the ice leading to that section. It was not confidence inspiring. No thanks!

I spent another 10 minutes in a last ditch attempt to get a screw into the base of the upper curtain. Luckily it went in and the ice was solid! I put on a screamer and then decided to take off up the vertical upper curtain. The ice formed in what seemed like a series of icicles layered on top of each other. I had to clear a good amount of ice for each tool placement however there were lots of good hooks and decent feet. I topped out over the upper curtain and made my way along a crusty snows ledge with a good soft layer of snow/ice which was great for the tools and a good mental break from the climbing below. On more easy ground, I ran out the last 10m swimming through waste deep powder and plunging my tools as deep as I could. I reached the tree and belayed the others up! 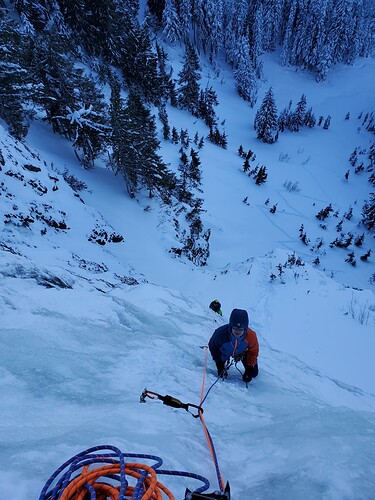 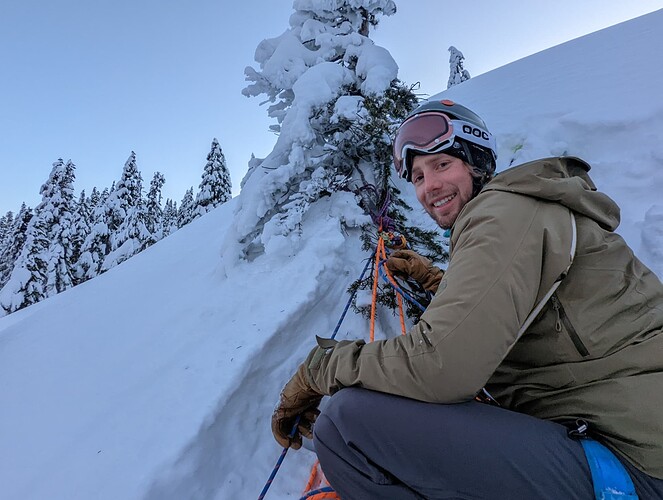 After reaching the top we saw the second party bailed from the upper curtain when it was apparent that following us up turned them around due to timing. We reached the top during sunset and knew we’d have to rap down in the dark. We found a tree amount 10m to the right with existing webbing and after inspection we decided to not use the webbing and rap from the tree directly on our own gear. After a full 70m rap, the test pull didn’t work! Communicating via radio, Isaiah decided to go off rappel as he was at the next tree for a last rap down.

From here I pulled up a bunch of slack, tied it off to lance and then took two 4m quad anchors and a biner in order to super extend the rappel down the snow slope to reduce the pulling friction. Lance went down next and after a test pull, all was good! I followed quickly and we wasted no time going down the first pitch gully to our skis. At this point is was full on night and we enjoyed some candy and our couple hour trip back down. 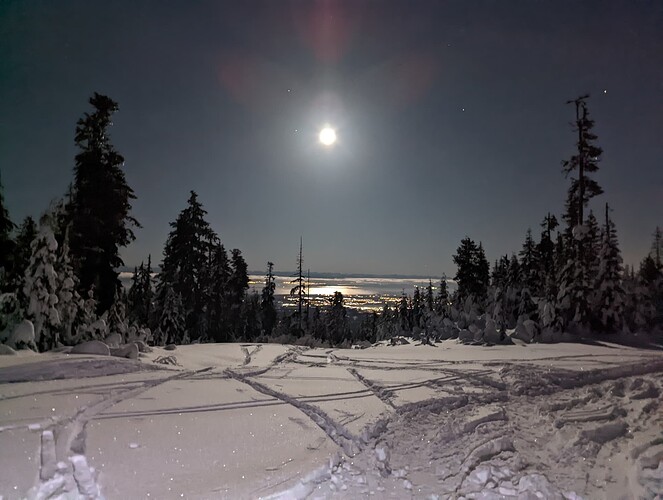