After speaking with a few locals in the area of Alberni as well as a few people well known in the VI ice climbing community, I heard some chat that the NF route may be in and climbable. Following a couple warm days early last week and then a cold period of about four days with no new snow, an attempt for Newman Foweraker was determined to be a go and we planned for a day trip on Nov 20th.

Early Nov 20th, I set out to Courtenay from Campbell River at around 3:50AM to meet up with Kyle Bourquin who would be joining on the trip. After 45 minutes grabbing some additional gear from a fellow climbers house as well as some coffee and the routine Bagel BELT from Timies, we were on our way to the climbers trail which we arrived at around 7:00 AM.

Arriving at the trail we saw that there was not much snow which was a good sign. We made quick timing up to the base of the beehive wall (around 1 hour) and then stopped to have a nice hot drink and access the safety of the approach gully as well as the ice we could see from a distance. The snow we traveled in on was pretty hard and compact, and there was no sign of recent slides in the gully. We geared up and approached. 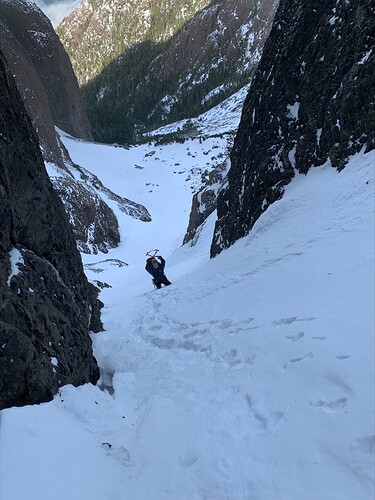 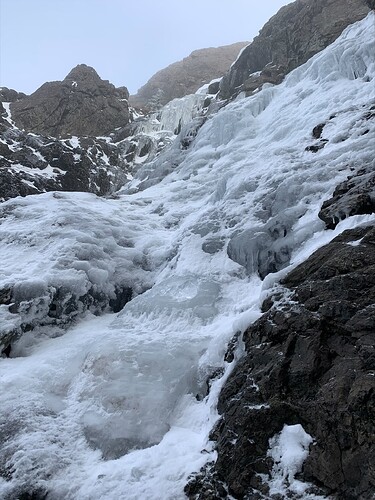 The best looking ice at the start of the route has formed around 1 inch thick over some rotten compacted snow and the nicer ice to the right was much too thin.

We decided I would lead on the first pitch after poking around on the ice and finding a few solid holds. I placed one of our smallest screws above head level at the start of the route and then led up to the bulge placing another good mid size screw along the way. about 35m into the first pitch the ice started thinning out. It was very clear at the route was not in to a point where we were comfortable continuing.

I had decided to traverse the safer ice to the right and made it to a ledge with a strong horn which I used to set up an anchor and then belayed Kyle up to my position. With both of us up there we spent some time looking at the ice formations and discussing the possible route forward and what the risks would be. 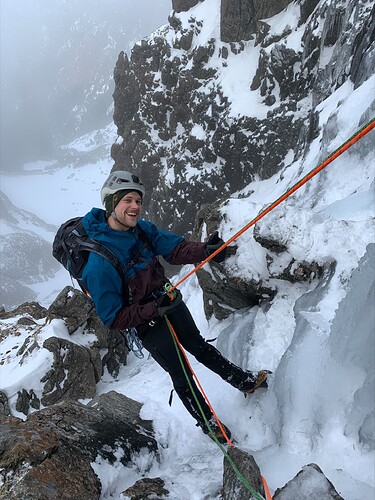 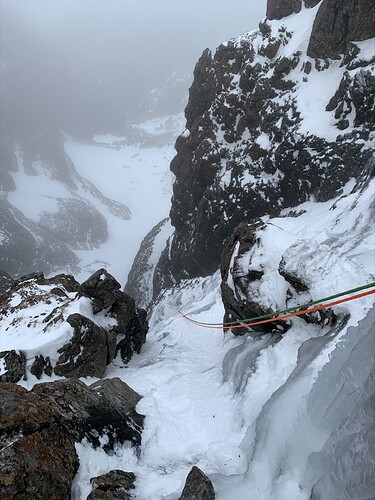 The main section traversing to the bulge which we would climb around to continue was around 3 to 4 inches with water running behind the ice. The ice leading to that point was marginal at best and we did not feel that a lead fall could be caught with the protection options we had. 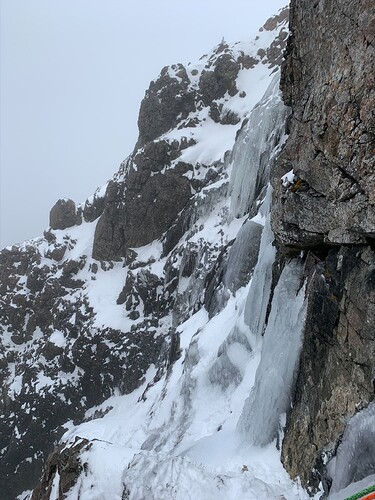 The photo above shows the conditions from our first belay station.

We decided to head down, Maybe next time!

A great adventure, @Jrelyeavoss! Thanks for being on the pointy end and sharing the great beta with us.

Great photos! Thanks for the update.
ttfn
Mary