July 25: : Week 2, Griswold Pass Summer Camp, see https://accvi.ca/programs/summer-camp/ for details (same as 2020), with the proviso that provincial covid restrictions have been reduced or removed.

This was altogether a very different summer camp from some of the others I’ve been on. In 2021 we returned to the undulating meadows and gentle glaciers of the Griswold Pass area, located NW of Bridge River, in the South Chilcotin Mountains. Partly it was the weather – the first day and a half were overcast, but then the clouds cleared and we were treated to blue bird days, one after another, and not a hint of smoke in the air, despite over 200 fires burning in the province, some just to the east.

There was a momentary scare on Thursday when, pre-dawn, there was a sudden smell of smoke in the dark. As the light increased, the surrounding ranges were hazy, and there was the awful fear that it was going to be the 2017 Lone Goat camp all over again (we’d had to evacuate early that year in dense smoke). But by noon the wind had shifted, the horizons had cleared and we were back to crisp alpine air. Lucky us.

A big difference this year was the happy chance that 11 of the 14 attendees were women. (Our 15th – also a woman – had had to cancel at the last moment due to a medical issue.) The ladies seemed to make friends more quickly, build consensus, and generally cooperate in a way that I’ve seldom experienced before. It was a pleasure, and manifest itself in many ways. On an uphill grind, a group of men would have been as silent as hunters stalking prey, but this camp week was very different – behind me was a cheerful chatter more typical of Saturday morning at the local coffee shop, than a steep hike!

This lightness came out in many forms – within a day the group had divided into an active group (the Energizers) and the rest. The former were impressive in their ability to climb everything in the valley, leaving early, keeping in touch over the FRS radios, and arriving back in camp (mostly) just before appetizers were served at 5:30. They covered a lot of ground, and the rest of us basked in their reflected glory. The latter, mind you, were no slouches, but where the Energizers would knock off two or even three summits in a day, the rest were content to tackle one, and then spend time exploring the flora and fauna, or swimming in the many tarns scattered about the valley.

We were blessed with an impressive collection of biologists, many experts in their fields. Subjects included botany (75 flowering species were identified), mammals (a large grizzly - at a distance - marmots, picas, chipmunks, plus goat, sheep and moose tracks). We had a herpetologist who waxed eloquent on frogs, toads, salamanders and their ilk, and several bird experts who identified the rare and common with ease.

Another difference was the laughter. I’m not saying we haven’t laughed on previous camps, but this year was a riot – there seemed to be side-splitting howls of mirth at any and all times. It really raised the enjoyment for everyone. And there was the evening meal – always a treat to have 6 evenings of creative cuisine, working around the participants’ food fads. Dinners were varied and delicious, and it was clear that everyone really enjoyed both serving and being served. And afterwards, there was music and poetry.

We were not alone in the valley. On the day of our arrival a party of 5 was seen near camp, but by the time we had pitched tents, they had left. Then on Friday a curious event occurred – first one and then three strangers arrived in camp. They had hiked up from the Bridge River FSR to the south and may (or may not) have been from the BCMC.

Understandably they were disappointed to find our camp, but that can’t excuse the aggressive attitude of one of them, whose first words were that we were ruining the area, and what did we plan to do about repairing the damaged environment? Happily, we had, days earlier, visited the old 2013 site, where absolutely no trace of any form of environmental damage was visible – the whole area looked pristine. On being told this, the accuser appeared mollified, but it left an unpleasant feeling among those who met them.

Despite that storm in a teacup, it was one of the best summer camps, with the best weather, in one of the best locales. All of Week 2 offers a “big thank you” to the Summer Camp Committee for their hard work. Novices and old hands alike greatly appreciated the amount of preparation that goes into making this annual event happen – thank you! 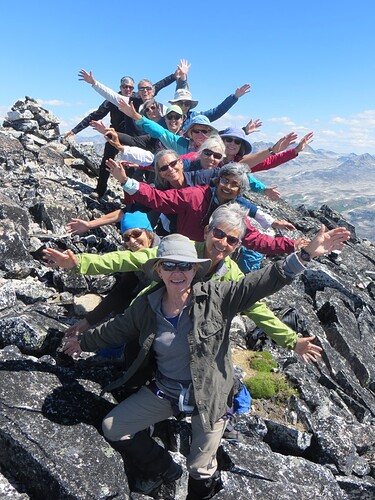 Another aspect of this sociable group needs to be highlighted. As Rick alluded to, many of them are accomplished climbers and hikers, but what also distinguishes them is how supportive they are to a weaker hiker like me. Not only would they happily slow down, but also invite me on the following days’ hikes. And more than that. On a day of glacier traverse, one of the very seasoned mountaineer (Sylvia) would volunteer to spot me all the way to the top, perhaps after seeing me struggling to put on crampons and harness that Rick found me (without even me asking!!). Such comradeship is hard to match! It’s way beyond what I thought a week of camping with people I don’t already know could be. Thanks to all these wonderful people who made it such a memorable week!

It was an amazing camp indeed! Once again I found a group of wonderful hiking/scrambling partners and even came home with a new biking partner too! Many thanks to Rick and Phee for managing the camp. I love the “cheerful chatter” comment @virockhound , my husband just calls it “yakking”!