You have probably heard that the Banff Centre Mountain Film Festival (BCMFF), a favourite early winter source of entertainment, is going virtual this year. This means that you can purchase a program of films to stream from the comfort of your own home at the time of your choosing. BCMFF has been a major fund-raiser for our section for many years, and has been key to helping us offer our wide range of programs, and support organisations aligned with our mission on Vancouver Island. We are really hoping that sales of this online event will help to raise funds for us to continue to offer our full range of activities to the community in 2021.

Please support ACC-VI by purchasing a ticket through our unique affiliate link:
https://filmfest.banffcentre.ca/?campaign=WT-151882

We are depending on members to share our affiliate link widely so the return to the club will be maximized. Please help us spread the word in your network. This may also be a great idea for a Christmas present for someone in your circle - no worries about postal delays or size fit!

Thank you for supporting ACC-VI - and enjoy the show!

Further information since this message was sent: we now have the line-up of films for the 2 programs on offer:

Hope this helps in your ticket purchase choices - enjoy!

This makes a great “virtual” gift too - you can have it sent to your recipient of choice.

Check out these teaser videos for the two programs and use the ACCVI affiliate link in Catrin’s first post to buy your tickets!

Link to AMBER promo teaser, one minute, on Vimeo:

Link to ONYX promo teaser, one minute, on Vimeo:

Buy for yourself, or give a gift of fabulous films from the Banff Centre Mountain Film Festival, to watch in the comfort of home.

Use this ACC-VI unique affiliate link to buy a program of films and support the ACC-VI:

More info on ACC-VI Facebook page, or questions to bmff@accvi.ca.: 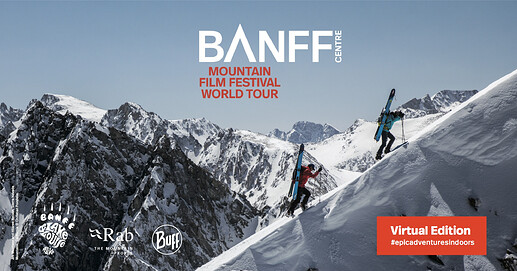 SECOND – an Award Winners: Monthly Film Series program, featuring film festival award winners from the last three years will be available for online viewing ($15USD) during the last week of each month as a recurring monthly series. Catch up on missed films or re-live some of the best that Banff has to offer.

To support ACCVI programs and initiatives, purchase all these film programs through this ACC-VI unique affiliate link:

More details on the ACCVI Facebook page and the ACCVI webpage event schedule.

The first two were amazing! I think “Free as can Be” was my favorite so far.